After a lots of doubts over whether Vitality Blast 2020 was actually going to take place due to pandemic outbreak, we are now at the cusp of the start. In the opening match, defending champions, Essex Eagle will take on Middlesex.

There are lots of changes in T20 Blast this year as the foreign players are not likely to be available and the format of the Vitality T20 Blast itself has been tweaked.
It will be pretty interesting to see whether Essex Eagles will be able to defend their title and do something that no team in the history of T20 Blast has done ? With the exclusion of foreign players, Middlesex batting lineup is likely to remain under pressure.
Essex Eagles has been in very good form in Bob Willis Trophy and will be hoping to carry the same momentum in T20 Blast as well. Simon Harmer – captain of Essex and probably the best bowler of the side too, picked 19 wickets in 2019 season. He will be hoping to play an even bigger role this season.
He will be supported by Sam Cook, Jamie Porter, and Aaron Beard as the seam bowlers of the side. With couple of all rounders present in the team, Essex form a decent bowling lineup.
However it is their batting that looks even more solid than bowling. A possible starting lineup comprising of players like Tom Westley, Cameron Delport, Dan Lawrence, Ryan Ten Doeschate is a robust batting lineup. However they will miss the services of Ravi Bopara, who will not be with the Essex Eagles after 18 years of service and this something that will be missed.
Bopara’s role as a finisher is tough to replace and one among Adam Wheater or Paul Walter is expected to step up. Although Essex Eagles do not appear to be the strongest T20 side but still they lifted trophy in last season. Hence they cannot be considered lightly.
On the other hand Middlesex has been hit hard by the change in the schedule of the T20 Blast. They will miss the services of their best batsmen like Eoin Morgan, Dawid Malan, AB de Villiers. In their absence players like Nick Gubbins, Max Holden, Steve Eskinazi will have to step up and raise their game.
Middlesex team’s strength lies in their bowling. Toby Roland Jones will lead their pace attack, with Nathan Sowter and Tom Helm will remain his supporter. Sowter has worked on his leg spin and has certainly improved. Tom Helm is expected to bowl in powerplays and in death overs. If Middlesex can get some runs on the board, their bowling attack can make it tough for other batting orders to get their runs in the tournament.

Weather forecast doesn’t look promising for the opening game of Vitality Blast T20. There are 50 percent chances of rain. However heavy rain is not expected, hence we should expect a game here.

Pitch at Chelmsford is usually a batting friendly wicket and we can expect some high scores in this match. There is consistent bounce in the pitch so the ball will come on to bat nicely. Over 180 runs were scored consistently last year. Even 200+ runs were scored twice in four matches last year on this pitch. Due to overcast conditions, pacers might enjoy bit of early swing.

Chelmsford has been a happy hunting ground for batsmen in the last season and the trend should remain same this year as well.

Pitch is suitable for batting and keeping rain threat in mind, captain winning the toss should opt to bowl first.

Best Picks For Dream11 From Middlesex

Players You Can Avoid In Grand Leagues 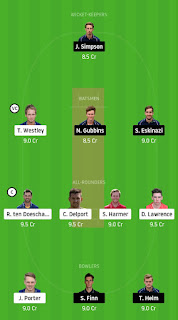