The Test Series is done and dusted and England has won it by a margin of 1-0. It could have easily been 2-0 if weather gods would have been kinder to the English side. After Test Series, its time for some T20 action. First match of this series will be played at Old Trafford, Manchester. The duo have enjoyed good rivalry in the past in this format and it will be pretty interesting to see which one will dominate the other.

Pakistan hasn’t tasted much success playing outside the sub-continent where they have lost several matches in the recent past. They have already faced defeat in Test Series and now they will be hoping for a strong back.

On the other hand, England has won their last five bilateral series, both, home and away. Apart from this they have a very strong unit in this shorter format of the game. Pakistani side has stunned several stronger teams in this format and it will be pretty interesting to see whether they can turn around things this time or no ?

Eoin Morgan would be positive going into this game as his team has done well in T20s all over the world in the last two years. Morgan would be aware of the fact that Pakistan has overseas trouble and shall look to exploit them to the full in this game.

The opening pair of Jonny Bairstow and Jason Roy will look to provide good start at the top. England has rested Jos Buttler and Jofra Archer for this series. David Malan, Tom Banton, Sam Billings, Eoin Morgan are expected to form middle order for the first T20. Billings had a very good series against Ireland and will be an intrinsic part of the middle order.

After a dream come back against Ireland, David Willey will once again lead the pace attack. Adil Rashid, Saqib Mahmood, Tom Curran should remain his supporter. England is not fielding their full strength side but still it is very strong unit.

On the other hand Pakistan side will be led by Babar Azam, one of the finest batsmen present in their side at the moment. Players like Fakhar Zaman, Haider Ali, Mohammad Hafeez are likely to be in playing eleven. There is uncertainity over the inclusion of Shoaib Malik but it will be a blunder of Pakistan doesn’t use his experience.

Imad Wasim and Shadab Khan are likely to handle all round duties. Mohammad Amir is back in squad and is likely to start. He will partner with another left arm pacer i.e. Shaheen Shah Afridi. With Haris Rauf, Naseem Shah, and Mohammad Hasnain, Pakistan is spoiled for choice.

Weather doesn’t look much promising as rain is predicted for the first match in Manchester. There is a possibility that we could be in for some delays or even overs reductions as we approach the start time.

It is going to be a batting friendly wicket as the surface is flat and full of runs at Manchester in T20s. Although there is some extra bounce in the surface that could test the batsmen from both the teams.

With some extra bounce on the surface, team batting first at this venue should be happy if they manage to cross 160 run mark. Here is a look at venue stats in T20s at this venue –

Out of the last five matches, four matches were won by side batting second on this ground. Apart from this keeping weather factor in mind, captain winning the toss should opt to bowl first.

Best Picks For Dream11  From Pakistan

👉 Tom Banton ( If he opens the innings )

England is currently placed at 1.57. If we calculate the winning percentage of England at these odds then it comes out to be 63.69 percent.

On the other hand Pakistan is currently placed at 2.37. If we calculate the winning percentage of Pakistan at these odds then it comes out to be 42.19 percent. 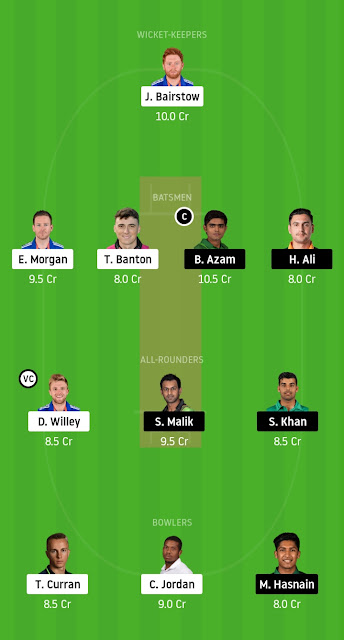 Disclaimer – We have created this team based on our own instincts and analysis. Make necessary changes in your final Dream11 team once the lineup is announced. Read our above preview and try to make your own Dream11 team.