Pakistan tour of England comes to an end with the third T20. Having already won Test series, England continued its dominating form over the visitors in second T20 as well. Ahead of Australia series, England will be looking to continue their fine form. On the other hand, Pakistan will look to end their disappointment with a win as a victory in the final match will help them level this series by 1-1.

Nothing has gone right for the visitors in this entire tour, whether in Test Series or in limited over cricket. They have went on to loose the games even after playing some good cricket. In the games they were in better shape, rain gods denied their victory.

In the second T20, Pakistan side went on to bat first after loosing the toss. Skipper Babar Azam ( 56 runs ) along with his opening partner Fakhar Zaman ( 36 runs ) provided them a solid start with 72 run opening partnership. Professor Hafeez then continued with his attacking 50 to take his team to 195/4 at the end of 20 overs.

For England, Adil Rashid was the stand out bowler who took the key wickets of Fakhar Zaman and Babar Azam and ended with a decent bowling figures of 4-0-32-2 in a match that was high scoring.

For Pakistan, Shadab Khan was the most successful bowler as he picked up three wickets including the wickets of English openers. He ended with  bowling figures of 4-0-34-3 but that was not enough to restrict the host from registering a victory.

With sunny and bright conditions, Manchester has a promising weather on match day. Hence there is no rain threat for the final battle.

In the last T20 we have seen that pitch was an absolute belter. Pacers were expensive in last game while leggies have had much success and we expect that the nature of pitch should remain same for third T20 as well.

England chased down nearly 200 run in the last game and that too with an ease. This indicates that pitch is highly favoring batsmen. Hence the captain winning the toss should opt to bowl first.

Best Picks For Dream11 From Pakistan

England is currently placed at 1.53. If we calculate the winning percentage of England at these odds then it comes out to be 65.35 percent.

On the other hand Pakistan is currently placed at 2.50. If we calculate the winning percentage of Pakistan at these odds then it comes out to be 40 percent.

Match Winner Prediction – Back England to win this series by 2-0. 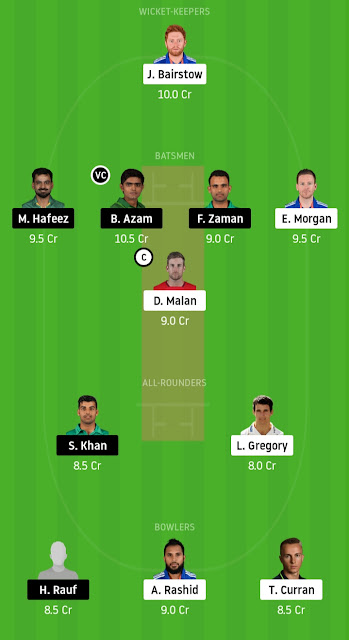