In the early days of September, Trinbago Knight Riders are scheduled to play two matches in two days. This match against St Kitts and Nevis Patriots will be their second match on second day.

With seven wins in seven matches, Trinbago Knight Riders are flying high in ongoing Caribbean Premier League season. No other team has managed to meet their standards so far. Most of their victories have been one sided. Apart from this they also became the first team to book their spot for the semi-finals this season.

On the other hand, St Kitts and Nevis Patriots has performed below expectations. They have star studded batting lineup with power hitters like Evin Lewis, Chris Lynn, Ben Dunk but still they have just managed to win one match out of their seven matches and are currently placed on bottom of the table.

Betting against Trinbago Knight Riders will take a lot of courage at the moment. The side is even winning when most of its batsmen don’t perform – a glimpse that we have seen against defending champions Barbados Tridents. Against Tridents, skipper Kieron Pollard, alone provided Knight Riders the joy of victory.

Trinbago Knight Riders has also decided to rest their important players and test their bench strength. In the absence of Sunil Narine, Sikandar Raza was handed over a chance. He took 2 wickets in a single over and proved his worth for Riders.

This kind of a balance in the team, shows that even if Trinbago doesn’t field their best eleven, they can still win matches. They have experienced batters in their ranks in the form of Colin Munro, Darren Bravo, Kieron Pollard, Lendl Simmons who are capable of scoring in bulk. As the tournament is progressing, Tim Seifert is also proving his worth.

In the bowling department, Sunil Narine remains their standout bowler. Even if he doesn’t pick up wickets, he will dry runs for the opponents. Fawad Ahmed has been expensive but still managed to pick up couple of wickets. Jayden Seales has been excellent along with Khary Pierre doing his job smartly.

On the other hand, St Kitts and Nevis Patriots are almost out from the race of semi-finals. In their last match, they dropped Chris Lynn and included Kieran Powell but nothing changed for them. Evin Lewis and Ben Dunk are the only consistent run scorers for the Patriots at the moment, although youngster Joshua Da Silva impressed everyone with his batting against Guyana Amazon Warriors.

Talking about Patriot’s bowling department, Jon Russ Jaggesar has impressed with his spin. Imran Khan has also done well but none of them could be called as word class spinners. Rayad Emrit is again the lonely consistent performer in this department. Ish Sodhi is having a bad season as well.

Conditions are expected to remain partly cloudy with almost no chances of rain on the match day.

After pretty low scoring at Queen’s Park Oval, now the matches have been shifted at Brian Lara Cricket Academy. Pitch may offer some bounce to fast bowlers in the early overs. Overall spinners will play crucial role. Batsmen will have to be more cautious in their strokeplay.

Most of the teams in this entire Caribbean Premier League 2020 so far have preferred to chase down the targets and sides batting second have tasted more success than the sides batting first. Hence we expect that the same trend should continue in this game as well.

Best Picks For Dream11 From Trinbago Knight Riders Side

Best Picks For Dream11 From St Kitts and Nevis Patriots Side 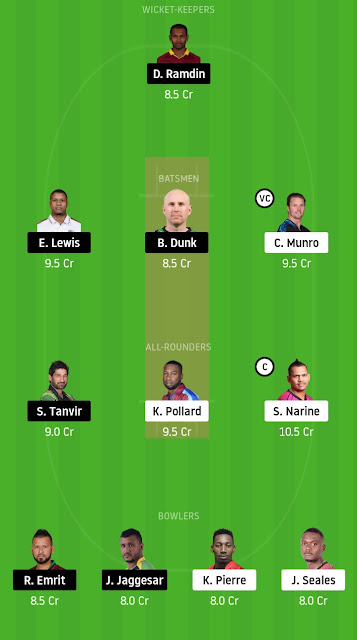