St Lucia Zouks have defied all odds till now but the battle against Trinbago Knight Riders remains to be their biggest challenge of the tournament. With an immaculately balanced team, things are going in favour of Knight Riders. In other words its a battle for top spot, whoever wins this game will occupy number 1 spot in points table.

Before the beginning of this tournament, no one would have expected this kind of performance from St Lucia Zouks except their fans. Darren Sammy has been proactive with his leadership which has certainly lifted their unit as a team.

If we look at rest of the teams in tournament, they all have been driven by individual brilliance but St Lucia Zouks is playing as a team. Up the order, Andre Fletcher is providing them good starts. Mohammad Nabi and Roston Chase have beautifully performed their duties in middle order. The duo have been excellent with the bat and ball.

Another contrasting positive aspect for St Lucia Zouks has been the performance of their quick bowlers. Addition of Scott Kuggeleijn has worked for them. With 10 wickets, he is currently on top of the bowling chart.

Overall Zouks does not have a single player that can lead them to victory. However, they do have a solid team that is being led by an experienced campaigner. Almost all of their players have responded in affirmative when asked to do the job and that has been the reason for their solid performance in the tournament. If they can continue with the same form, Knight Riders will certainly have their work cut out.

But Trinbago Knight Riders is the only team in the tournament so far that has 100 percent winning record. They have defeated teams like Jamaica Tallawahs, Guyana Amazon Warriors and Barbados Tridents. They started off in a spectacular manner and have only improved ever since.

Sunil Narine did bulk of the damage in their first two wins. While their game against Barbados Tridents showed the kind of balance Knight Riders possess. Batting on a slower surface, they have failed to get good starts so far. Lendl Simmons hasn’t been impressive so far. The pair of Darren Bravo and Colin Munro in middle order have done bulk of scoring for Knight Riders.

Skipper Kieron Pollard may not have had his chances in batting in the first two games but his knock of 41* of just 17 deliveries proved his worth once again. His 98 run partnership with Darren Bravo came in just 7 overs against defending champions.

Dwayne Bravo and Jayden Seales have had a bad day against Tridents in last match but the likes of Fawad Ahmed, Sunil Narine, Khary Pierre did a an excellent job.

Overall Trinbago Knight Riders have produced fantastic performances in the tournament so far. Their batting goes deep and they possess a versatile bowling attack. They were the title favorites to begin with and it won’t be an easy task for St Lucia Zouks to overcome this challenge.

There are negligible chances of rain on August 25 in Port of Spain, Trinidad. Hence a full match is expected. Temperature will remain around 32 degree celsius. Partly cloudy sky and a cool breeze will greet the players.

As the match is being played on a new surface, stroke play may be bit easier than that at Brian Lara Cricket Academy. As the game is scheduled in day time so the dew factor will remain absent. The surface is expected to get slower with the time and therefore spinners will have great impact on this game. Team that bat first should be happy if they manage to cross 160 run mark.

The track at Queen’s Park Oval, Trinidad allows the batsmen to play at front foot. Small size of the ground becomes another advantage for them. Here is a look at this venue stats in CPL 2020 –

In this ongoing season of Caribbean Premier 2020, most of the teams have preferred to bowl first after winnings the toss and we expect that the same trend should continue in this game as well.

St Lucia Zouks is currently placed at 2.25. If we calculate the winning percentage of St Lucia Zouks at these odds then it comes out to be 44.44 percent.

On the other hand Trinbago Knight Riders is currently placed at 1.57. If we calculate the winning percentage of Knight Riders at these odds then it comes out to be 63.69 percent. 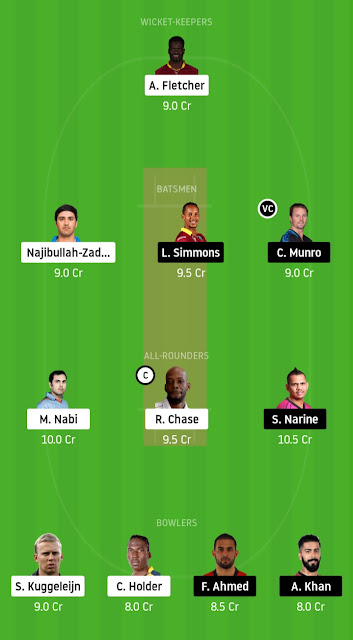 Disclaimer – We have created this team based on our own instincts and analysis. Make necessary changes in your final dream11 team once lineup is announced. Read our preview and try to make your own dream11 team.