The two sides have met earlier in this season where Barbados Tridents were able to register victory by a narrow margin of 6 runs. Both the sides have struggled in ongoing CPL season so far but Patriots haven’t been able to hold their nerves in close games.
With three losses in three games, Rayad Emrit’s side will have to show show lot more improvement in all departments of the game. Their batsmen and bowlers have failed to compliment each other. In their last game against St Lucia Zouks, they suffered another loss just by 10 runs. One more defeat will would reduce their chances of making it to the semifinals.
Chris Lynn and Evin Lewis have got starts but failed to convert them into a big score. This is certainly pushing pressure on rest of the batting. Joshua Da Silva, Ben Dunk will have to play with more responsibility. They also need strong contribution from batsman like Denesh Ramdin.
Patriots are lacking depth in their batting unit so players like Sohail Tanvir, Rayad Emrit will have to do big hitting down the order. In their last against St Lucia Zouks. Cottrell was expensive and Tanvir was no different. Ish Sodhi is consistently leaking lot of runs. Rayad Emrit is doing his best at the moment.
On the other hand Barbados Tridents enter into this game with back to back defeats. Holder will be hoping of a strong come back so that they can move up in points table. Good news for Tridents is that their openers – Johnson Charles and Shai Hope are looking in good touch.

Corey Anderson’s form is a big problem for defending champions. Kyle Mayers and Jonathan Carter will have to be more responsible. Skipper Jason Holder is the lone fighter in middle order of Tridents. Down the order they have players like Ashley Nurse, Rashid Khan, who can hit the ball over boundary ropes.

There will be clear skies over Trinidad on August 25 and we hope to see good cricket. There are no chances of rain in this match. Temperature will remain near 31 degree celsius.

Matches from now will be played at Queen’s Park Oval hence a fresh pitch will be used in this match. Being a fresh pitch it may offer some bounce and carry to fast bowlers. Team batting first should be happy if they manage to cross 160 run mark. Although there is decent turn for spinners on the pitch.

Queen’s Park Oval has been a Happy hunting ground for batsmen where we have seen lots of runs being scored. Shorter boundaries offers lots of hitting opportunities. Here is a look at some stats of this venue that we have seen in last season in CPL –

Probable 11 For For St Kitts and Nevis Patriots

Player You Can Avoid In Grand League 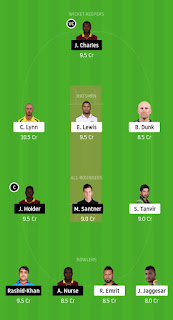