In the ninth game of CPL 2020, defending champions Barbados Tridents will take on current table toppers Trinbago Knight Riders. The Knight Riders have won both of their opening games and are looking in red hot form. On the other hand Tridents have one win out of the two matches that they have played so far.

Having won their last three matches against Knight Riders, this fact will boost Trident’s confidence. Main problem with Barbados Tridents is their batting unit which haven’t fired yet. So far we have witnessed individual brilliance in their batting. Knight Riders will look to exploit their weakness in batting, hence it can be an epic battle between the two.

Kieron Pollard would be a happy man as his side has outplayed their rivals in all departments of the game so far in this tournament. In last game Knights Riders overcame Tallawah’s challenge and Pollard would certainly want his men to carry the same momentum into this game as well.

Opening combination of Sunil Narine and Lendl Simmons will look to provide good start. Narine has already shown his good form but his partner Simmons is looking out of touch. With Colin Munro, Darren Bravo, Kieron Pollard, Tim Seifert, Dwayne Bravo, Trinbago have the best middle order among all other competents in this tournament.

It’s not only just their batting but bowling unit of Knight Riders has also performed as per expectations. New ball pair of Ali Khan and Jayden Seales have done quite well so far. Narine is enjoying bowling on slow surface and Fawad Ahmed is no different. Dwayne Bravo and Khary Pierre were expensive in previous game and the duo will desperately want to make a strong comeback in this game.

Jason Holder and his men might consider themselves unlucky to have lost the last game against St Lucia Zouks under duckworth lewis rule but it was indeed an extremely poor effort from their side. They haven’t stitched big partnerships yet in this ongoing CPL season. Corey Anderson has disappointed everyone. Kyle Mayers along with Jonathan Carter will have to play with responsibility.

Except Jason Holder no other batsmen have played with responsibility in previous two games. Tridents have best spin attack in the tournament. Rashid Khan, Hayden Walsh will need to spin a web for Rider’s batsmen if they want to overcome this battle. Kiwi all-rounder Mitchell Santner looks in good form at the moment.

Isolated thunderstorms are expected in Trinidad on match day which shouldn’t create much problem. Temperature is expected to remain around 32 degrees.

Spin bowlers have gained extra reward from the pitch at Brian Lara Cricket Academy and the trend should remain the same for this game as well. Batting will not be an easy task on the surface. Side batting first should be happy enough if they manage to cross 160 run mark.

Brian Lara Cricket Academy, Tarouba, Trinidad is a good T20 wicket where there is support for both – batsmen as well as bowlers. Batsmen will have to get adjusted to the pace of the surface in order to extract most out of it. Here is a look at valuable stats of this venue in CPL 2020 –

Bowling first seem to be the winning mantra on this wicket as team batting first have failed to set up a good target for their opponents. Apart from this weather is also a crucial factor which no one avoid at the moment, hence Captain winning the toss should opt to bowl first.

Trinbago Knight Riders are currently placed at 1.66. If we calculate the winning percentage of Knight Riders at these odds then it comes out to be 60.24 percent. 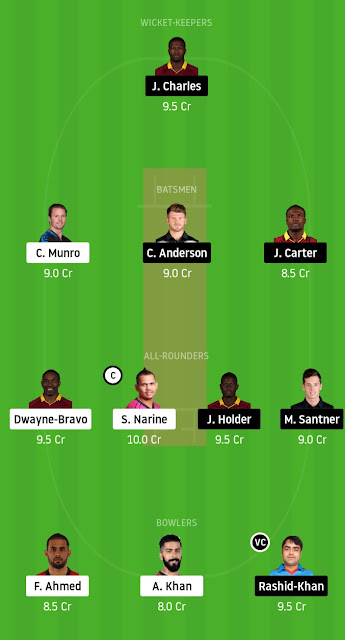