CPL 2020 has already seen some close games and the cricket fans have seen good action from the field. In the seventh game of this league, St Kitts and Nevis Patriots will be up against St Lucia Zouks.

It’s an important game for both the sides. St Kitts and Nevis Patriots have big names like Chris Lynn, Evin Lewis, Ben Dunk but still they have lost both of their opening games. On the other hand St Lucia Zouks have won their last game that they played against defending champions.

So far things haven’t gone right for Rayad Emrit’s side. After having lost both of their opening games they are placed on bottom of the points table. To avoid bottom slot, Emrit’s side need to win this game. Some of their players have done really well but St Kitts and Nevis Patriots have failed to fire as a team.

At the top, Chris Lynn and Evin Lewis have failed to convert their starts into a big score. Ben Dunk has performed comparatively better but the real problem lies in middle order. Denesh Ramdin and Nick Kelly will have to score big in middle of the overs and avoid throwing their wickets.

Jahmar Hamilton and skipper Rayad Emrit will have to do heavy lifting towards the end which hasn’t been the case so far in previous matches. Overall St Kitts and Nevis Patriots will need to work upon their batting.

However Patriot’s bowling unit have done much better. Sheldon Cottrell along with Jon- Russ Jaggesar have done pretty well with the new bowl. Skipper Rayad Emrit is putting his best efforts and picking up wickets. Ish Sodhi will have to bowl tighter lines in order to stop opponent’s run flow.

On the other hand victory against defending champions would have certainly boosted Zouk’s confidence. Openers Rakheem Cornwall and Andre Fletcher did well in last game which was shortened to 5 overs due to rain. Mark Deyal, Roston Chase are their two in form players and the duo are contributing with the bat and ball.

Najibullah Zadran and Mohammad Nabi are big hitters of the ball. Captain Darren Sammy along with Scott Kuggeleijn have the ability to score quick runs down the order. In the last game they included Saad Bin Zafar who bowled pretty well. Mohammad Nabi and Roston Chase are not conceding much runs as well. Scott Kuggeleijn and Kesrick Williams are picking up wickets but they need to work upon their economy rate.

Cloudy conditions are expected throughout the day on August 22 in Trinidad. Temperature will be around 32 degrees.

So far in the tournament we haven’t witnessed any high scoring game which means the pitch is not supportive to batsmen. As for now pitch has provided assistance to bowlers. The side that bat first will be happy if they manage to cross 160 run mark.

Brian Lara Cricket Academy provides good contest between bat and ball. There is some help for pacers in initial overs but spinners get maximum help on this surface. Here is a look at venue stats in this ongoing CPL –

In Caribbean Premier League 2020, team batting second have tasted more success than the team batting first. Another factor is the weather, which is playing a huge role in ongoing CPL. So captain winning the toss should opt to bowl first.

St Kitts and Nevis Patriots are currently placed at 1.80. If we calculate the winning percentage of Patriots at these odds then it comes out to be 55.55 percent.

On the other hand St Lucia Zouks are currently placed at 2.00. If we calculate the winning percentage of Zouks at these odds then it comes out to be 50 percent. 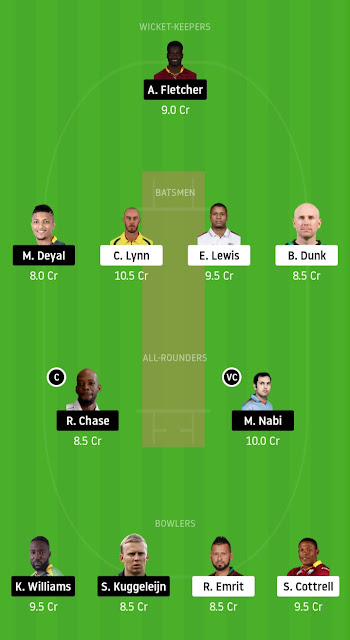 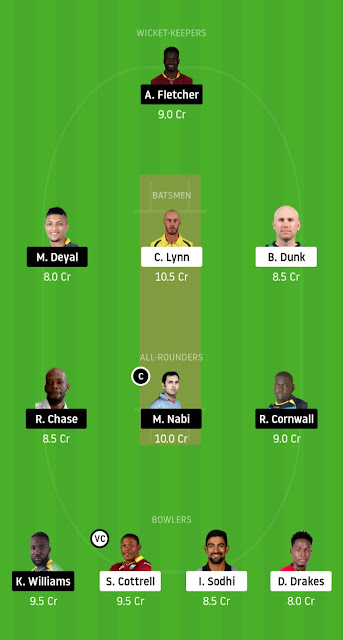