The rain robbed us of a truly great contest in the second test between England and Pakistan and the third test match is also scheduled at the same venue. Thankfully, weather forecast for this match is much better than the previous one.

England is leading this three match test series with 1-0, with one game to play, the host cannot loose the series at all. On the other hand, Pakistan have not lost a series in England in last 10 years. They have this last opportunity left with themselves to level the series.

We could witness a game of only 96 overs in the previous test, hence the players are going to be very fresh for the final clash. Rain may force the groundmen to opt for the same pitch but we should expect a fresh pitch for the final clash between two sides.

With no Ben Stokes, England added Zak Crawley in their side and he showed his utility while batting at number three position, where he managed to score a half century. Even for the final game we don’t think that England is going to change its lineup. What they might be thinking is, whether Dominic Bess deserves a place in final lineup ? This question arises as he didn’t bowl a single over in last game.

English batsmen played Pakistani bowlers with ease on day 5 and that should encourage Root and company. However, batting will not be as easy in the final game which is scheduled on the same venue. Stuart Broad is their most consistent fast bowlers at the moment on home soil. He along with experienced James Anderson took 7 wickets in the game that was disrupted by rain.

Chris Woakes was bit unlucky as he couldn’t manage to pick up wickets but Sam Curran was not much effective. What we feel is that four bowlers are enough in English condition but England is used to having Ben Stokes in their lineup – one of the finest all rounder in world cricket. If they are planning to go with five bowlers, Dominic Bess might get another game.

On the other hand Pakistan fought very well in the last game and would be pretty disappointed not to have got a chance to bowl at English batsmen due to weather condition. Mohammad Abbas along with Shaheen Shah Afridi looked dangerous with the new ball and the duo managed to pick up wickets.

Youngster Naseem Shah failed to generate movement off the ball and Pakistan may look to include experienced Sohail Khan for the final battle. Yasir Shah as usual bowled pretty well and is expected to continue as a lone spinner in Pakistani side.

Visitors are facing problem in their batting unit. They included Fawad Alam to bolster the batting but his comeback began with a duck. If he gets another chance, there will be pressure on him to prove his point of inclusion in challenging English conditions.

Babar Azam performed as per expectations and Mohammad Rizwan’s innings of 72 is definitely going to boost his confidence. Shan Masood failed to impress with the bat but his partner Abid Ali scored half century. Although Abid Ali’s half century was a result of several dropped catches. Their captain Azhar Ali is a walking wicket at the moment.

Asad Shafiq has also failed to impress and is short of runs which makes their middle order vulnerable. However being the final test, it’s a must win game for Pakistan, not only to level the series but also to save their pride of last 10 years.

Unlike last game, weather conditions are likely better for the final battle but not so encouraging. There are chances of scattered showers on day 1, day 2 and day 3 are expected to remain cloudy. Rain is expected on day 4 and day 5.

Pace bowlers have always earned reward from the track at Rose Bowl, Southampton as the the track offers great seam and bounce right through the game. Spinners have done well here with clear skies which doesn’t seem to be a possibility right now.

Rose Bowl has always been a happy hunting ground for the fast bowlers. Here is a look at some valuable stats that we have witnessed at this venue –

Matches Won By Home side – 2

Matches Won By Touring Side – 1

Teams batting first have always had advantage at Southampton. However, batsmen will need to spend some time in middle of the wickets in initial overs.

Best Choices For Captain In This Match Will Be

On the other hand Pakistan is currently placed at 3.50. If we calculate the winning percentage of Pakistani side at these odds then it comes out to be 28.57 percent.

Match Winner Prediction – England are favorite to win this game but taking fact into consideration that Pakistan has not lost any series in England in last 10 years, there is a possibility that they can stun England in final battle.

England is already leading in the series with 1-0 and they cannot loose it now. Overall it is expected to be a cracker of a game where Pakistan may stun England. 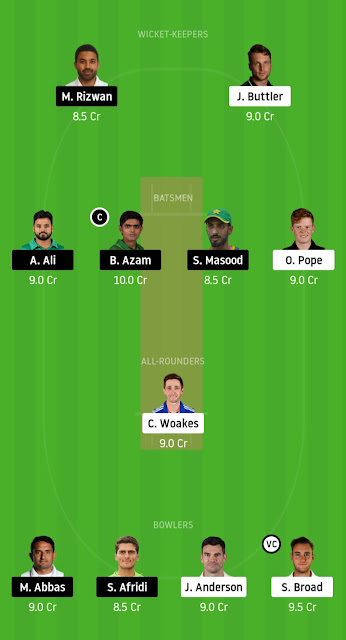