After a delayed opening of much awaited CPL 2020, crickets fans are pretty excited as renowned cricket leagues are getting back on their way. Due to Covid threat, the ongoing Caribbean Premier League is scheduled in Trinidad with limited travel.

In the fifth match of the tournament, St Lucia Zouks will lock their horns against Barbados Tridents. Both the teams have played one match each and the duo are well acquainted with the conditions as well as the opponents. Barbados Tridents are defending champions whereas St Lucia have always found themselves in bottom slots in the points table.

Last year St Lucia Zouks were placed on second position from the bottom and this year they will be without the services of Colin Ingram, Rile Rossouw and it will be challenging for them to grab top four spot.

On paper, St Lucia Zouks do have some quality players this season. Experienced campaigner like Darren Sammy is leading their side. They have drafted Mohammad Nabi, who has played hundreds of T20 games across the world along with Roston Chase who will form the backbone of middle order. They have included Kimani Melius, who surprised everyone in St Lucia T10 Blast with his towering hits.

On the other hand defending champions Barbados Tridents started their campaign on a higher note. The kind of fighting spirit they showcased against St Kitts and Nevis Patriots was remarkable. After loosing the toss they were invited to bat first. They had a horrible start as they lost their top three batsmen under 10. Kyle Myers and Jason Holder lifted their team spirit as the duo scored 37, 38 runs respectively.

Late cameo from Rashid Khan and Mitchell Santner helped Tridents to post a total of 153 runs for the loss of 9 wickets. Although it was a narrow total in front of star studded Patriots. Rashid Khan and Santner bowled amazingly well which resulted in Trident’s victory. Entering into their second game, Tridents will be high on confidence and are favourites in odds.

Scattered showers are expected throughout the day in Trinidad, hence the game might see rain interruption.

As seen in the recent matches, surface will be conductive to spin bowling but fast bowlers are expected to get help in initial overs of the game. Team batting first will definitely want to post more than 160 runs on the board which is not going to be an easy task.

Taking weather condition as a factor, side that win the toss should opt to bowl first as Duckworth Lewis rule could come into play.

👉 Kyle Mayers – When he came to bat in first match,  Tridents were in deep trouble but his partnership with captain Holder made them bounced back strongly. That means he has ability to build his innings when it is needed the most. Overall he has scored 240 runs at an average of 10.9 in 33 CPL matches.

👉 Mitchell Santner – In his debut match he played a vital innings of 20 runs and picked up two wickets with a maiden over. His all round abilities makes him a very important player for Dream11.

👉 Andre Fletcher – He usually open the innings and he is overall third highest run scorer in CPL history.

👉 Rakheem Cornwall – In 33 CPL matches he has scored 544 runs at an average of 20.2. In the bowling department he has picked up 16 wickets. Being an all rounder and an opener, he can be a smart pick in your Dream11 fantasy team.

Players You Avoid In Grand Leagues

St Lucia Zouks are currently placed at 2.62. If we calculate the winning percentage of St Lucia Zouks at these odds then it comes out to be 38.16 percent. 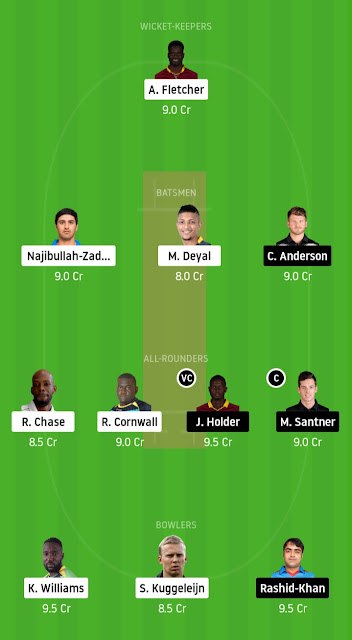 Disclaimer – We have created this team based on our own instincts and analysis. Make necessary changes in your final dream 11 team once the lineup is announced. Read our previe and try to make your own dream 11 team.