In the third game of CPL 2020, Jamaica Tallawahs will lock their horns against St Lucia Zouks. Being the first game for both the teams, each one of them will look to start their campaign with a victory. Talking about their performance in last season, both the teams performed below expectations and occupied bottom slots in the points table. With new season, both sides will be hoping for a fresh start.

Two times title winner, Jamaica Tallawahs have big names in their squad. They do had a bad season last year but they will be eager to make a strong comeback this season. For St Lucia Zouks, nothing have changed in last 7 years as they have occupied bottom slots in last 7 seasons. It will be pretty interesting to see how Sammy and his boys perform this season.

Rovman Powell – the new skipper of two times title winners Jamaica Tallawahs, will be hoping that his side will leave their worries behind of last season, where they managed just two wins. The side has a good mix of young and experienced players this season.

Glenn Phillips is expected to open the innings with their skipper Rovman Powell and would be aiming for a good opening stand in the game. Jermaine Blackwood, Johnson Charles will be handling middle order duties. Down the order they have one of the best T20 batsman – Andre Russel. He is certainly a match winner and can lead his side to victory single handedly especially in run chases. He will be supported by Carlos Braithwaite.

In the bowling department, addition of Mujeeb Ur Rahman has boosted their spin attack. He will be supported by his another spin partner – Sandeep Lamichhane. Fidel Edwards and Oshane Thomas will be leading pace attack. Russel and Braithwaite add depth in their fast bowling.

On the other hand, Darren Sammy has seen enough losses when it comes to Caribbean Premier League. His team doesn’t have stars like their rival but they have defeated Tallawahs twice last season which will boost their confidence.

Openers Andre Fletcher and Rakheem Cornwall have done well in last season. The side will hoping for good contribution from players like Najibullah Zadran, Kimani Melius, Roston Chase in middle order. Mohammad Nabi and Darren Sammy will be handling responsibility of finishers for Zouks.

Sammy and company are deprived of fast bowlers. Lack of experienced bowling unit may hurt their campaign this season too. Obed McCoy along with Kesrick Williams are the only known faces in their place attack. However, Sammy along with Nabi and Roston Chase will look to restrict flow of runs in middle overs.

Clear skies are expected over Trinidad on August 19. Hence we will witness a full game.

Some pace and bounce is expected from the surface in early overs as the pitch hasn’t seen much cricket off late. Side that bat first would need a score of more than 160 runs to defend it successfully.

Brian Lara Cricket Academy has been a happy hunting ground for batsmen. Shorter dimensions of this ground allow the batsmen to free their arms.

Chasing a total has become a trend in T20 cricket in recent years. It will be first game for both the teams, so the side that win the toss should opt to bowl first and try to restrict their opponent on a low total.

👉 Andre Russel – One of the best hitter in T20 cricket.

👉 Andre Fletcher – He didn’t performed well with the bat last season and scored 184 runs in 10 matches. But his overall record in CPL is quite impressive as he has scored 1870 runs in 66 matches. This makes him overall third highest run getter in CPL history.

👉 Mohammad Nabi – He is an experienced cricketer who has been a part of several T20 leagues like IPL, BBL and now its time for CPL. He has played 258 T20 matches in his career so far where scored 3951 runs and picked up 255 wickets.

👉 Sandeep Lamichhane – He has played 6 games in CPL 2019 where he picked up 8 wickets at an impressive economy rate of 6.5.

It’s a bit of surprising prediction as Jamaica Tallawahs got Andre Russel in their rank. But in last 5 head to head meetings, Zouks have smashed 51 sixes whereas Tallawahs could hit only 47.

Jamaica Tallawahs are currently placed at 1.53. If we calculate the winning percentage of Tallawahs at these odds then it comes out to be 65.35 percent.

On the other hand At Lucia Zouks are currently placed at 2.50. If we calculate the winning percentage of Zouks at these odds then it comes out to be 40.00 percent. 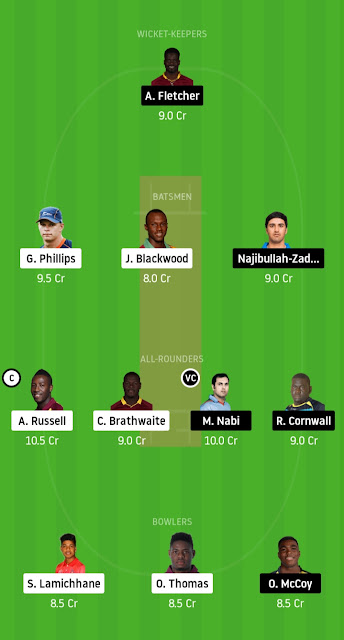