The two teams have played twice at Brian Lara Stadium in the past and Trinbago Knight Riders have won on each occasion.

The wait is finally over and after months of no T20 action, the first match of CPL 2020 will witness an encounter between Trinbago Knight Riders and Guyana Amazon Warriors. With so much of expectations from the fans, we are expecting this to be a cracker of a contest.

Being the first game of the season, there will be pressure on both sides as the duo will definitely want to start their campaign on a higher note. With new skipper this season, Guyana Amazon Warriors will miss out some of the best performers of last season and this will increase pressure on the side.

With Kieron Pollard at the helm, Trinbago Knight Riders have one of the strongest squad this season. Apart from this they have retained their core players which adds to their stability. National T20 captain will look to lead Riders from the front.

For Trinbago, Lendl Simmons and Sunil Narine form a very strong opening pair and the side will want them to provide steady start at the top. Simmons was among the top scorer last season, he will be looking to continue with the same form here as well.

Colin Munro, Darren Bravo, Tim Seifert, Kieron Pollard form one the most reliable middle order of the tournament and can change their gears as per conditions. Down the order they have one of the most experienced campaigner in T20s i.e Dwayne Bravo.

Knight Rider’s bowling attack looks better compared to their rival in this match. Although they donot possess any big name in fast bowling but they have experienced campaigner in the form of Dwayne Bravo – someone who can bowl in powerplays, in middle order and in death overs as well. Captain Kieron Pollard, Darren Bravo can also bowl when needed.

On the other hand, Chris Green – the new skipper for Warriors has big shoes to fill in with previous skipper Shoaib Malik not part of the squad this season. They will also be without the services of several key players due to Covid-19 restrictions and national duty.

Talking about their batting lineup, Warriors have Brandon King and Chandrapaul Hemraj at the top who were in prime form last season. They will be followed by hard hitters like Shimron Hetmyer, Nicolas Pooran. Addition of Ross Taylor will add stability in their middle order.

Down the order they have Chris Green – someone who is known for bowling at tight lengths. He will be supported by Keemo Paul, Sherfane Rutherford, the duo can contribute with both – bat and the ball. Inclusion of Imran Tahir is certainly a good move. Fast bowling lineup will consist of Romario Shepherd, Naveen-Ul-Haq.

Clear skies will there on August 18 over Trinidad and conditions are expected to be perfect for a T20 game.

The fresh strip will have something on offer for the pace bowlers in the game and batsmen would need to be cautious in their approach. Overall spinners have done much better on the surface in recent years. With power hitters on both sides, team batting first will want something more than 160 runs.

Brian Lara Stadium has seen big scores on the board as flat pitch along with shorter boundaries allow the batsmen to play their strokes with ease.

Being the first game of the season both teams will be looking to achieve good start. Traditionally team batting first has tasted success on this ground but in T20s almost every team prefer chasing.

👉 Sunil Narine – He is is expected to open the innings. He has capability to score quick runs and will bowl 4 crucial overs. Hence Narine becomes a must pick.

👉 Ross Taylor – Veteran kiwi middle order batsmen is still one of the finest batsmen in world cricket. With lots of experience under his belt, he can be a differential pick for small leagues as many of the fantasy players will avoid him in small league.

👉 Chris Green – With no Shoaib Malik in Guyana this year, Green has been given responsibility of a skipper. He is not a renowned player but still he bowls at very tight length and picks up wickets due to his accurate line and length. He is also a handy batsman who can hit the ball with great piece of timing.

👉 Kieron Pollard – No introduction is required to this man as we all know what kind of capability he posses.

👉 Colin Munro – He is one the most consistent batsman when it comes to Caribbean Premier League.

👉 Dwayne Bravo – As for now people are avoiding him from their Dream11 team but he can emerge out as best bowler from Trinbago Knight Rider’s side in the opening match. Apart from this if he gets to bat on, it will be an additional benefit. You can also pick him as your captain/vice captain.

👉 Lendl Simmons – With more than 80 selection percentage, you can take risk in dropping Simmons in grand league.

👉 Brandon King – As for now Bet 365 odds are going against this opening batsman hence it can be smart move to drop him from your Dream11 fantasy team.

In last 5 head to head encounters, the duo have managed to clobber 66 sixes which is an average of 13.2 sixes per match. Trinbago Knight Riders and Guyana Amazon Warriors have played two matches at Brian Lara Stadium and they managed 23 sixes which is below an average that market is offering.

There is no doubt that there are big hitters on both side but the average of sixes does not add upto it. 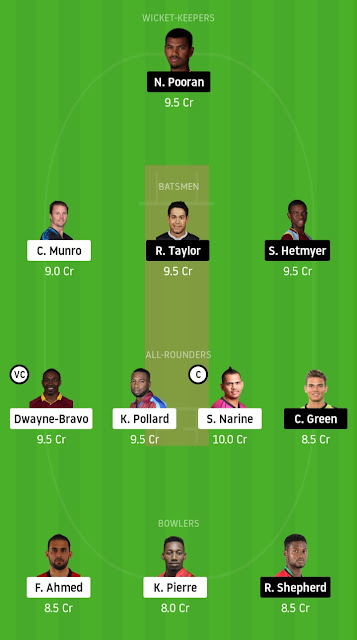