Tournament favorites Manchester City are eager to win their first ever Champions League title this season, and their two legged win over one of the most successful side in Champions League history i.e. Real Madrid means, they are hungry to end their years of disappointment in the competition.

Lyon is certainly a tricky side to overcome, hence it will not be so easy for the Citizens. In the last 16, Lyon conquered Juventus which means they can disappoint any team on their day.

After loosing their title to Liverpool, defeat in FA Cup have raised questions for Manchester giants but they carry a strong record of being unbeaten in their last eight Champions League assignments.

City are worried as their star striker – Sergio Agüero remains out of the field due to injury. Apart from this, Manchester City have conceded in each of their last six UEFA Champions League matches, which means they do have problem in defence.

On the other hand French underdogs – Lyon have proved that they are capable of upsetting odds on their day. Heading into this fixture, they have closed the doors for club like Juventus in last 16.

Outside France, Olympique Lyonnais were turned over in each of their last three Champions League away matches and they conceded twice on each occasion.

With six wins and two draws, Manchester City are one of the most consistent team in Champions League this season. Though, their weakness in defence is something that opponents have been able to exploit. With Maxwel Cornet, Moussa Dembele, Memphis Depay, we can expect goals from both sides.

Keeping Manchester City’s star studded attack in mind and Lyon’s away record, it is going to be another cracker. Manchester City are averaging 2.5 goals per 90 minutes this season in Champions League.

In last two Champions League games that have been played between these two sides, Lyon have won once, while another game resulted in a draw. Manchester City are winless against Lyon in last two meetings.

– Sergio Agüero remains out of action till late August 2020 due to knee injury.

– Zackary Thomas Steffen is expected to recover from ligament injury by late August 2020.

👉 Memphis Depay – 26 years old winger has played in 6 Champions League matches where he scored 6 goals and assisted none.

Who Should Be Captain In Manchester City Vs Olympique Lyonnais Dream11 Today ?

Choosing right captain is always a cause of concern for dream11 fantasy players. But don’t worry we have eased the task for you. After analysing Bet 365 odds we have selected some players who can be the perfect choice for captain in this match and those players are –

You might have noticed that the team which wins grand league has some big players missing. After analysing Bet 365 odds we have shortlisted some players to whom it you can avoid in grand leagues and those players are –

👉 Manchester City are undefeated in this season of Champions League.

👉 Manchester City are averaging 2.5 goals per 90 minutes in this Champions League season.

Player Passes – Based on Bet 365 odds 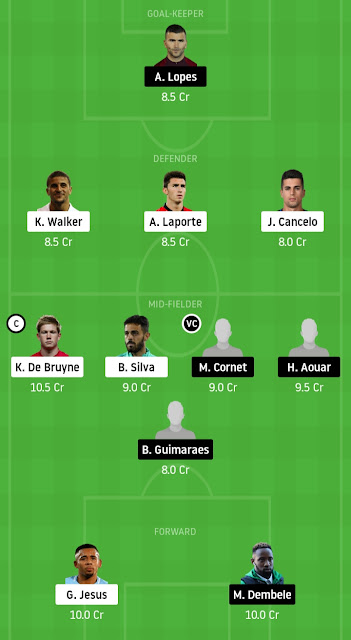 Disclaimer – We have created this team based on our own instincts and analysis. Read our preview and try to make your own Dream11 team. Make necessary changes in your final Dream11 team once the lineup is announced.