With Champions League back on its way, clash between star studded sides i.e. Barcelona and Bayern Munich remains in the headlines. Both the teams have lifted Champions League trophy five times and once again the duo are hunting their sixth title, though several factors indicate that Bavarians have an edge.

There are only few clubs who can match Spanish giants level and Bayern Munich is certainly one among the list. Since 2009, Barcelona have always made it into Champions League quarter finals and now they are up against German giants.

Barcelona are yet to taste defeat in this season’s competition. They have made it to quarter finals from a group which comprised of Borussia Dortmund, Inter Milan and Napoli.

Three draws, one goal winning margin in group stages clashes, and just two clean sheets during their run shows dip in Barcelona’s form. Lionel Messi is still their magician, his wonder goal against Napoli is a clear indication of what he is capable of. But he will certainly need support from his team as he cannot take his handle things lonely against side like Bayern Munich.

On the other hand, German giants carry magnificent record of 100% win ahead of Friday’s knockout clash. They have scored 24 goals, including 10 in two meetings with Spurs, conceding just five goals, Munich were best club among their group.

Year 2020 has been a dream year for Bayern Munich, having won each of their last 18 games. Apart from this they have won 21 games out of 22 that they have played since January 1 this year. Bavarians are averaging 3.9 goals per 90 minutes in Champions League this season which shows their pure class.

– Ousmame Dembele is doubtful for this match due to thigh injury.

– Samuel Umtiti is also doubtful for this match due to knee injury.

– Dani Morer is expected to be fit from hamstring injury by late August 2020.

– Benjamin Pavard is expected to be fit from foot injury by late August 2020.

1. Robert Lewandowski – 31 years old Polish striker is in prime form and almost hard to skip in small league. In 7 Champions League matches he has scored 13 goals and assisted 4 times.

2. Lionel Messi – Every football fan is familiar with his name and ever football fan in the world knows what he is capable of. In 7 Champions League matches he has scored thrice and assisted same number of times.

Who Should Be Captain In Barcelona Vs Bayern Munich Dream11 Today ?

Choosing right captain is always a cause of concern for dream11 fantasy players. But don’t worry we have used the task for you. After analysing Bet 365 odds we have selected some best players who can be the perfect choice for captain in this match and those players are –

You might have noticed that the team which wins grand league has some big players missing. After analzsing Bet 365 odds we have shortlisted some players to whom you can avoid in grand leagues and those players are –

👉 Bayern Munich have a 100 percent winning record in Champions League this season.

👉 Bayern Munich are averaging 3.9 goals per 90 minutes this season in Champions League.

Barcelona are currently placed at 3.50. If we calculate the winning percentage of Barcelona at these odds, then it comes out to be 28.57 percent. But recent studies shows that when a team is placed at these odds then it actually wins just 1 percent of its matches. 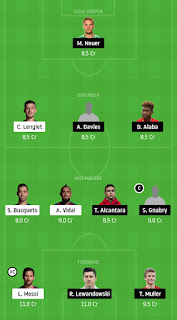