With International cricket back on track, it has been a fascinating summer for English side. The first Test Match was a pure witness of what we actually say – cricket is an unpredictable game. The first game went on both sides and Pakistan were nearly on the verge of ending their poor away form before Chris Woakes emerged out as a silent assassin for England.

Shan Masood’s heroic of 156 runs went in vain when Pakistan’s batting lineup collapsed in second innings. Till the end of first innings they were once leading in the game but lack of inexperience caused them another away loss. After dominating the game for nearly three days, England bounced back in fashion and emerged out as winner by 3 wickets.

Joe Root would be happy the way his side bounced back after a poor show in first innings. It was England’d lower middle order who played a vital role in their victory. Considering poor away form of Pakistan, Joe Root will definitely want to bag this series as they enter in this game with 1-0 lead over the visitors.

England’s opener Rory Burns and Dominic Sibley will need to step up and provide their team a much needed initial boost. Although Ben Stokes is out from this series which is a major blow for the hosts. But looking at their middle order which comprises of Joe Root, Ollie Pope, Jos Buttler, Chris Woakes, it should not create much problem for them. Dominic Bess, Stuart Broad are also known to contribute with the bat. Overall England is looking very balanced side at the moment.

In terms of bowling, James Anderson may not be at its best but Stuart Broad is regularly picking up wickets. Apart from this Chris Woakes is also becoming headache for the opponents. Jofra Archer is a lethal bowler who can bowl with tight lengths constantly.

On the other hand Pakistan are surrounded with several worries. Shan Masood was a positive for them in the first game. Although this side look over dependent on players like Babar Azam, Azhar Ali. These two batsmen are the core of their batting lineup. Azhar Ali will be hoping that his side will leave their worries behind and give their 100 percent in this game as it is a do or die game for them.

Yasir Shah was a big positive in first game but he may not be much effective at Rose Bowl, where the pitch favour pacers more than the spinners and overcast conditions means, ball may not turn as per expectations. Shaheen Shah Afridi, youngster Naseem Shah, Mohammad Abbas will have to bowl with much better lines if they want want to help their side in leveling the series.

According to accuweather, the weather conditions between August 13 and 17 are not encouraging at the moment. There will be overcast conditions and rain is predicted for all five days of the match.

Traditionally, batting at Rose Bowl has always been challenging as the fast bowlers get good bounce and carry  off the surface. The team that bat first should be happy if they manage to get past 350 run mark.

As mentioned above, Rose Bowl has been happy hunting ground for the pacers. The venue tests the patience of batsmen and those willing to spend time on the surface will certainly do well here. Let us look at some records at this venue –

Two Test Matches have been played on this ground recently where team batting first have won the game on both those occasions. Apart from this most of the teams have preferred to bat first in England in recent times so captain winning the toss should not hesitate to bat first.

👉 Pakistan have lost their last seven Test Matches that they have played away from sub-continent.

👉 Pakistan bowling is over reliant on spinners and the conditions in England are pacer friendly.

We are backing, England To Win. 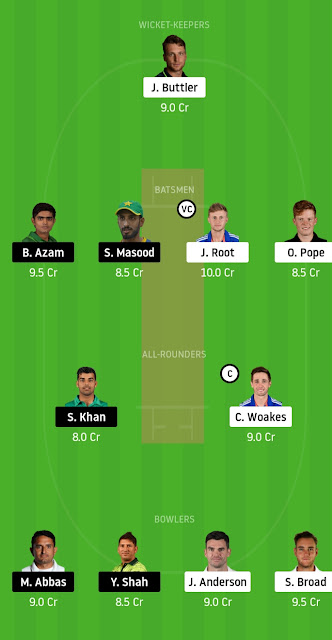