Manchester United and FC København have only met twice before with each one of them winning on one occasion. It was back in 2006-07 Champions League group stages when these two teams faced at each other – Red Devils won by 3-0 at Old Trafford before loosing 1-0 in Copenhagen.

14 years later both these sides are up against each other in order to book their place for UEFA European League semi finals. If United win here, it will be second instance when they will reach European semi – finals since Alex Ferguson’s retirement in 2013. Under Solskjaer’s guidance, United are huge favourites to win this game.

– Axel Tuanzebe is expected to recover from leg injury by early September 2020.

– Luke Shaw is expected to be back on field by late August 2020 as he has not yet recovered from ankle injury.

– Phil Jones is sidelined for this match due to knee injury.

–  Nicolaj Thomsen will not play this match.

👉 Mason Greenwood – 18 years old English winger has played 7 matches in Europa League where he scored 5 goals and assisted once.

👉 Jonas Wind – 21 years old centre forward has played just one match in European competition where he scored 2 goals and assisted once. He was also named Player of the match for his performance in that lonely match he has played so far.

👉 København have failed to score in their last four meetings against English sides.

👉 The Red Devils won each of their last four away Premier League games without conceding.

👉 United have kept clean sheet in seven of their last 10 games in Europa League.

Who Should Be Captain In Manchester United Vs FC København Dream11 Today?

Choosing right captain is always a cause of concern for Dream11 fantasy players but don’t worry we have eased the task for you. After analysing Bet 365 odds we have selected some players who can be perfect choice for captain in this match and those players are –

You might have noticed that the team which wins grand league has some big players missing. After analysing Bet 365 odds we have figured out some players to whom you can avoid in grand league and those players are –

On the other hand FC København are currently placed at 12.00. If we calculate the winning percentage of København at these odds then it comes out to be 8.33 percent. 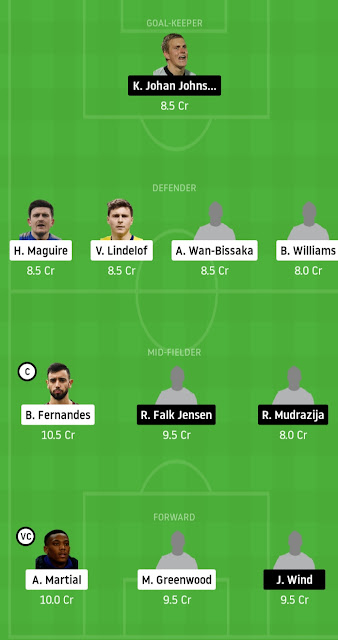