Contents hide
1 Match Details
2 Head To Head Record ( In last 7 Matches )
3 Recent Form Of Both Teams ( In Last 5 Matches )
4 Team News
5 Real Madrid
6 Probable Lineup For Manchester City
7 Probable Lineup For Real Madrid
8 Key Players For Dream11 Prediction In Small League
9 Manchester City Vs Real Madrid Match Facts
10 Who Should Be Captain In Manchester City Vs Real Madrid Dream11 Today?
11 Players You Can Avoid In Grand League
12 Champions League : Manchester City Vs Real Madrid Odds Comparison Case Study
13 Player Passes – According to Bet 365
14 Manchester City Vs Real Madrid Dream11 Team
After a long wait of five months Manchester City will host Real Madrid at Etihad Stadium in the hunt for Champions League trophy. The Citizens is leading this fixture, having already established 2-1 victory back in February at Santiago Bernabeu.
With Premier League title won by Liverpool, City’s dream of winning back to back FA Cup title also shattered but they are aiming at Champions Cup. Pep Guardiola and company will certainly want to deliver their best here in order to cheer their fans.
On the other hand recently crowned La Liga champions Real Madrid proved an irresistible force in Spain after lockdown, winning 10 of their last 11 league fixtures to finish a comfortable five points lead over their rival Barcelona.
13 times Champions League winners Real Madrid form have slipped this season, having won only three of their seven fixtures they have contested in this season’s tournament. They have tasted success against clubs like Galatasaray ( twice ) and Brugge.
Leading to their poor form in this tournament, Real Madrid’s prime central defender Sergio Ramos is suspended for this game which will give an additional benefit to City.
Manchester City’s home form has been phenomenal since the project restart, having won six out of six assignments on home soil. They have managed to score 24 goals in those six fixtures at Etihad Stadium. Hence we are expecting City to maintain their winning momentum, although against robust defence of Real Madrid, winning margin may not be big.
Los Blancos have conceded just six goals in their final 11 La Liga fixtures and they have scored atleast one goal in 23 of their 25 competitive fixtures in 2020. Taking these factors into consideration both teams are expected to find the nets in this fixture.

In last 7 matches that have been played between these two sides, Manchester City have won twice, Real Madrid have won thrice while other two games ended in a draw.

Manchester City
– Sergio Agüero is expected to recover from knee injury by late August 2020.
– Benjamin Mendy is a suspended for this match.

– Sergio Ramos is a suspended for this match.

Who Should Be Captain In Manchester City Vs Real Madrid Dream11 Today?

Choosing right captain is always a cause of concern for Dream11 fantasy players but don’t worry we have eased the task for you. After analysing Bet 365 odds we have shortlisted some players who can be perfect choice for captain in this match and those players are –
👉 Kevin de Bruyne
👉 Karim Benzema
👉 Gabriel Jesus

You might have noticed that the team which wins grand league has some big players missing. After analysing Bet365 odds we have selected some players to whom you can avoid in grand leagues and those players are
👉 Raheem Sterling
👉 Riyad Mahrez

Player Passes – According to Bet 365 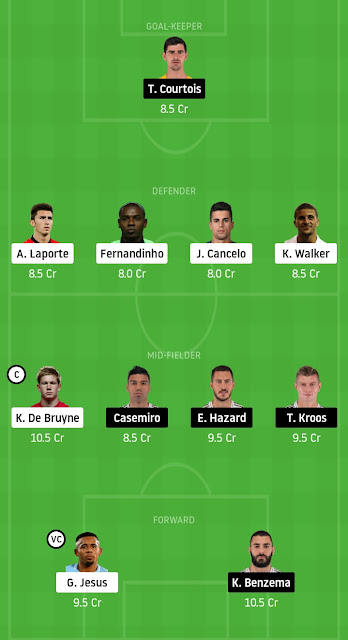