Contents hide
1 Match Details
2 Weather Condition
3 Pitch Condition
4 Venue Details
5 Toss Strategy – Win The Toss Bat First
6 Probable Playing 11 For England
7 Probable Playing 11 For Pakistan
8 England Vs Pakistan 1st Test Match Facts
9 Match Winner Prediction
10 England Vs Pakistan 1st Test Match Dream11 Team For Grand League
England vs Pakistan  first Test Match of the three match series between will be played at Manchester. This series gathered lot of headlines when Pakistan cricketers were tested positive for Covid – 19. England will be boosted by the fact after having made come back from behind to win the Test Series against West Indies.
On the other hand Pakistan will look to start their campaign on a higher note but their Test form in recent five years is incredibly poor away from their home. Ahead of this game, their major concern would be batting which doesn’t seem to be in good form in practice matches.
The ball is expected to seam and swing, it is important for the visitors to spend time in middle of the wickets. However, England’s top players are in good form. With quality players on both sides, it is going to be an exciting series for cricket fans.
Joe Root would be proud of the fact how his team made comeback against West Indians. Along with him, Ben Stokes is in great form and the duo provide solidity in middle order. With Ollie Pope, Jos Buttler, Chris Woakes, Dominic Bess, Stuart Broad, England’s lower order looks rock solid at the moment.
James Anderson may not be at his best this summer but he is classical bowler. Stuart Broad alongside Chris Woakes is bowling at his best. Jofra Archer too haven’t had much success in Test Series against West Indies but he is a dangerous bowler.
Captain Azhar Ali will have big task to reunite his team as they have lost their last 6 Test matches that they have played away from their soil and that too with a big margin. They will certainly need good start from Shan Masood and Abid Ali. Babar Azam and Azhar Ali are the two best batsmen in their rank. Down the order, Sarfaraz Ahmed and Mohammad Rizwan will have to do well in order to boost youngster’s confidence.
Shaheen Shah Afridi and Mohammad Abbas will share the new ball. Youngster Naseem Shah has already earned lot of praises. Spin department will be handled by experienced leggie Yasir Shah. Faheem Ashraf will take the charge as an all rounder.

There are no chances of rain throughout the five days of match hence we will witness an exciting action without any interruption from nature’s side.

It will be difficult track to bat on specially in early sessions of the game. Batsmen will have to spend time on this wicket in order to score runs. Spinner’s role start from day 3 when the pitch starts deteriorating and they do get good turn and bounce from the surface. Pitch at Old Trafford offers assistance to fast bowlers and they also do well with an old bowl when conditions are overcast.

In last 10 Test matches, team batting first have won 9 times. As mentioned above, pitch is good for batting in first innings and as the game progresses, it becomes difficult to bat on this surface. Hence Captain winning the toss should not hesitate to bat first.

👉 England has wonderful record at Old Trafford, having won five of their last six games played here.
👉 Pakistan have lost their last 6 Test matches that they have played out of sub continent.
👉 James Anderson need 11 more wickets to become first bowler in Test match format to take 600 wickets.

As per our prediction, England should win this game dramatically. 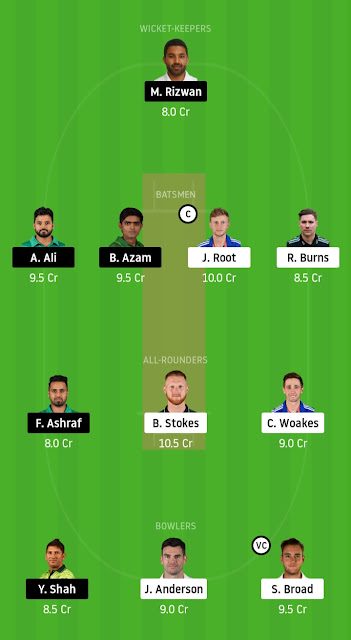