Contents hide
1 Match Details
2 Weather Conditions
3 Pitch Conditions
4 Venue Details
5 Toss Strategy – Win the toss, bat first
6 Probable Playing 11 For England
7 Probable Playing 11 For Ireland
8 England Vs Ireland Best Picks For Dream 11
9 England Vs Ireland Odds Comparison Case Study
10 England Vs Ireland Dream 11 Team
England vs Ireland final match of ongoing series will be played at Southampton on Tuesday. The first two matches were won by England as it was expected before the series. The both matches were scripted in similar fashion where Ireland batted first and world champions chased down the target.
This game is dead rubber for England as they have already won the series but as world champions they will definitely want to finish it off with a white wash. On the other hand Ireland looked struggling during entire game in the first two ODIs.
Looking at the result for now one might be considering Ireland a weak side but there were instances when Irish team tried to fight back and dragged England on back foot.
In the first ODI at one stage Ireland were 28/5 but still they fought back to post 150+ runs on the board which was a sort of miracle. In the second ODI too, Ireland elected to bat first and managed to score 200+ runs. Although these targets were tiny infront of sides like England but they were not easy victories for England.
Irish batsmen may not have performed as per expectations but their bowlers did quite well which is positive outcome for them. They did manage to grab early wickets , didn’t allowed English batsmen to play freely. Batsmen like Jason Roy, James Vince have not been able to score half century even in first two games and we must credit Irish bowlers for this.
England is not playing their first choice players as they have preferred to test their reserved players for this series. There have been few positives for England in the form of David Willey, Sam Billings, Saqib Mahmood.
David Willey has certainly given outstanding performances in both matches. He has picked up 7 wickets till now. Saqib Mahmood has also picked up couple of wickets and Sam Billings has shown what he can actually do in pressure situations. Sam Billings is highest run scorer for England in this series, taking fact into consideration that he bats at no 5 position makes it really special achievement for him.

In terms of weather forecast, a mostly sunny day is expected with some clouds cover can be expected. There are very less chances of rain.

Different strip will be used for this match and another warm day means spin is going to play great importance in this match. Overall we can expect the track to have something for everyone in it, as has been the case in first two ODIs.

In last match Ireland won the toss and elected to bat first. They did manage to get past 200 run mark against World Champions which means pitch offers great support for the batsmen in the first half.
On comparing average innings score of both innings, side batting first looks in benefit. Hence captain winning toss should opt to bat first.

From England
👉 David Willey – The left arm pacer is enjoying his comeback as he is consistently picking up wickets. He took his maiden 5 wicket haul in first ODI and grabbed 2 wickets in second ODI along with he scored 47 runs in last game. Overall he is proving his all round capabilities for his national team in ongoing series.
👉 Jonny Bairstow – After failing in first ODI, he emerged out highest run scorer in second game. He needs 75 runs to reach 3000 ODI runs.
👉 James Vince –  He is a strong technically sound batsmen but unfortunately not being able to convert his start into big scores. But still he will be a must pick for dream 11 fantasy players as he will bat one down and in last match he took a wicket in his short spell of 4 overs.
From Ireland
👉 Curtis Campher – Not a renowned in international cricket but he scored back to back half centuries against world champions. In his debut match he scored unbeaten 59 runs which was second highest score on ODI debut for Ireland, behind only Eoin Morgan.
👉 Andy McBrine – Being a bowler he is rather emerging as an all rounder in this series for Ireland. He scored 40 crucial runs in first ODI and also batted well in second ODI as well. 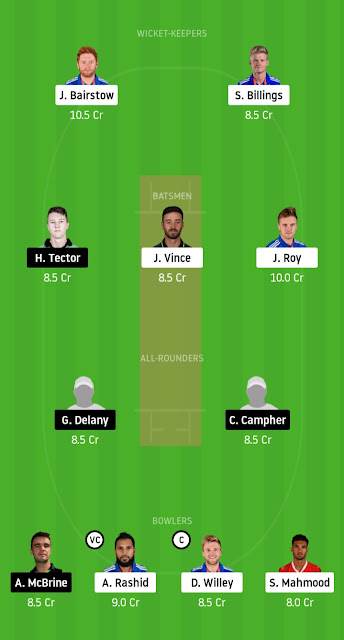 Join Our Dream11 Prediction Telegram Channel For Updates – @freeteams4d11
Disclaimer – We have crested this team based on our own instincts and analysis. Make necessary changes in your final dream 11 team once the lineup is announced. Read Our preview and try to make your own dream 11 team.