Contents hide
1 Match Details
2 Weather Conditions
3 Pitch Conditions
4 Venue Details
5 Toss Strategy – Win The Toss, Bat First
6 Probable 11 For England
7 Probable 11 For Ireland
8 England Vs Ireland Best Picks For Dream11
9 England Vs Ireland Odds Comparison Case Study
10 England Vs Ireland 2nd ODI Dream11 Team For Small League
England vs Ireland first game was a huge disappointment especially for Irish fans. The game totally went one sided. Ireland batsmen batted terribly, hence the result was never in question.
There were few moments in the game where Ireland could have built pressure on experienced English side but they lost all those opportunities. Ireland lacked team spirit and the ability to fight back.
After loosing the toss, visitors were invited to bat first but their top order didn’t performed as per expectations. Irish batsman Stirling ( also the highest run scorer in ODIs for Ireland ) went cheaply , followed by their captain Andrew Bailbirnie.
Gareth Delany gathered few boundaries but couldn’t convert his start into a big score when his team needed the most. Debutant Harry Tector couldn’t open his run account and went for a duck.
Curtis Campher, another debutant for Ireland showed some glimpse of fight back and scored a well deserving half century. He was well supported by Andy McBrine who scored 40 crucial runs and helped his team to post 172 total on the board.
At one stage Ireland were 28/5 and their lowest ODI score of 80 runs was under serious threat. Thanks to debutant Curtis Campher and Andy McBrine, the duo helped their team to post a respectable target on the board.
Chasing a low target of 173 runs, England also didn’t started well as their top four batsmen – Jason Roy, Jonny Bairstow, James Vince, Tom Banton couldn’t get past 30 run mark. In absence of Joe Denly, wicket keeper batsmen Sam Billings fired with bat and scored 67 off 54 deliveries. He was well supported by captain Eoin Morgan till the end.
It could have been much easy victory for World Champions if their top order batsmen wouldn’t have thrown their wickets easily. This is something they will want to improve  in upcoming fixtures.

There was no rain interruption in the first ODI but scattered showers are foretasted for this game. Humidity level is expected to be around 60 percent.

It is clear that same strip will be used for second ODI which means pacers will get early movement off the seam. Traditionally its a bat first ground but batting under lights proved much easier in practice matches on this surface.

Southampton is one of the most loved venue for batsmen as it offers 5.51 runs per over on an average, which is highest in England. Generally surface gets slower in second half of the innings.

Historically, The Rose Bowl has been bat first surface. Team batting first have enjoyed more success on this ground. In the last match, Ireland were 28/5 at one stage but still they reached 172 which was a sort of miracle.
At 28/5, Ireland’s lowest ODI score of 80 runs was under serious threat but still managing a respectable score shows that the surface is always good to bat on. 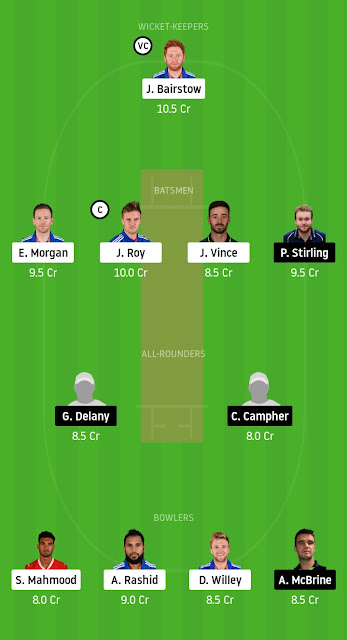