Contents hide
1 Match Details
2 Weather Conditions
3 Pitch Conditions
4 Venue Details
5 Toss Strategy – Win The Toss, Bat First
6 Probable 11 For England
7 Probable 11 For Ireland
8 England Vs Ireland Best Picks For Dream11
9 ICC World Cup Super League : England Vs Ireland Odds Comparison Case Study
10 England Vs Ireland 1st ODI Dream11 Team For Small League
The first game of ICC Men’s Cricket World Cup Super League will be played between world champions England and Ireland. Introduced to spice up One Day International ( ODI ) cricket, Super League will determine qualification for the ICC Men’s Cricket World Cup 2023 with the top seven teams automatically booking their spot at the event in India – statement by ICC.
Just after 24 hours of winning test series against West Indians, England will lineup against Ireland for the ODIs. With lots of new faces included in ODI team doesn’t mean that England is fielding a weak side or taking Ireland lightly.
This series may not be of much importance to England but Ireland certainly has much more to gain. Newly launched ODI Super League will officially begin with this series which will be the basis for 2023 World Cup qualification.
Highly balanced English side will see the return of their ODI captain Eoin Morgan. Jonny Bairstow and Jason Roy are expected to open the innings followed by James Vince. Eoin Morgan generally bats at number 4 position. Middle order will see stiff competition as there are players like Moeen Ali, Joe Denly, Tom Banton to choose from.
Talking about bowling department, the four bowlers for the first ODI are likely to be Adil Rashid, Tom Curran, David Willey, Saqib Mahmood. Except from Rashid, other three are not their first choice ODI bowlers but the trio have done pretty well in domestic circuit and will definitely want to leave an impact in this series.
On the other hand Ireland will start their campaign as under dogs and are expected to remain in the same rank throughout the series. Ireland has struggled in limited over cricket as their players have been pretty inconsistent. Rating Netherlands as better team in 50 over format won’t be surprising.
Ireland need to take every match on a serious note and the players should step up with responsibility. Ireland has some renowned names in their squad like Paul Stirling, Kevin O’ Brien, Andrew Bailbirnie but their inconsistency has hurt Ireland.
Although players like William Porterfield, Harry Tector, Curtis Camphor and Lorcan Tucker have proved their worth in middle order. Boyd Rankin, Joshua Little, Craig Young, Simi Singh are expected to handle bowling department for the first ODI.

We have witnessed rain interruption in recent test matches but clear skies are expected for this encounter with no chance of rain. Humidity level is expected to be around 49% and temperature is expected to be 22.13 degrees.

Like most in England, Southampton is high scoring venue, which is going to be a batting paradise. The bowl will come on to bat nicely and there will be very little help for the bowlers. Average first innings score at the venue is about 248 in last 28 ODI matches.

With 5.51 being the average of runs scored per over, Rose Bowl is one of the most batting friendly venue in England. The ground has seating capacity of 17,000 spectators.

As discussed above, team winning the toss should opt to bat first without any doubt in order to utilise most of batting friendly conditions. Anything over 300 run mark will be difficult to chase on the surface. 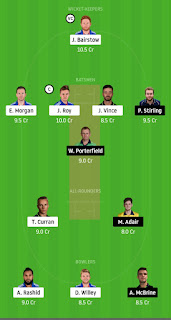