Vitality Blast 2020: Top 2 Sides Against Each Other – Kent vs Sussex Dream11 Prediction

Kent Spitfires won by 1 run when these two sides met earlier in this tournament.

With every team facing each other in round robin matches, Vitality T20 Blast 2020 has completed its journey to midway. Now, every team will face off each other for the second time in ongoing tournament in order to get lead in points table. In 53rd match of the tournament, Kent and Sussex will lock their horns against each other in order to grab to position in South Group.

With eight points from five matches, Kent is leading South Group in the table. Sussex is placed on second position with seven points in same number of matches. Kent are in a three match winning streak and will look to maintain their winning momentum as the league phase move ahead.

On the other hand Sussex have won three of their last four games, losing one game against Kent with a narrow margin of 1 run. Sussex will look to overcome their rival and we are expecting this to be a cracking contest between top two sides of their group.

Kent openers – Zak Crawley and Daniel Bell Drummond are in prime form and the team will expect them to provide good start again in this important match. With Heino Kuhn to follow next, Kent have quality top order. Alex Blake, Jordan Cox, Jack Leaning are known for their hard hitting capabilities.

Fred Klaassen will once lead their fast bowling attack. He will be supported by Tim Groenewald. They both are wicket taking bowlers and one should definitely pick them in fantasy cricket team. Imran Qayyum will be handling spin duty.

On the other hand Sussex Shark’s skipper Luke Wright is leading his team from front. In last match he scored 83 runs off 59 deliveries. In absence of Phil Salt, David Wiese was promoted to bat higher in batting order and his contribution of 41 runs was really valuable. At one stage Sussex were 57/3 but the partnership between Luke Wright and David Wiese took them to a respectable score of 159/5 at the end of 20 overs.

Danny Briggs and Tymal Mills are constant performers in bowling department and the duo took 2-2 wickets each in last game that helped Sussex to seal a comprehensive win over Hampshire. Ravi Bopara has now moved in Sussex after serving Essex for 18 years and was economical with this bowling. Addition of Chris Jordan has also strengthen their bowling attack.

Weather Condition – Canterbury is expected to have partly cloudy conditions for the match day with no interruption of rain.

Pitch Condition – Canterbury has a balanced pitch which supports batsmen and bowlers. However, batsmen have slightly more advantage on the surface. We are expecting 160-180 runs on this pitch in first innings.

Teams batting second have enjoyed more success at Canterbury so we expect, captain winning the toss should opt to field first.

Kent Spitfires is currently placed at 1.90. If we calculate the winning percentage of Kent at these odds then it comes out to be 52.63 percent.

On the other hand Sussex Sharks is also placed at 1.90. If we calculate the winning percentage of Sharks at these odds then it comes out to be 52.63 percent. 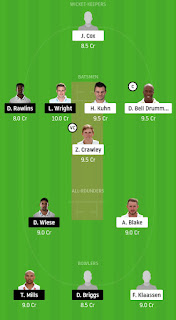