England and Australia will now both move to Manchester in order to lock their horns with each other in 50 over cricket – the format both sides will be more comfortable to play . Although, Australian side lost T20 series by 1-2, but still they managed to save their top position in ICC T20 ranking after winning last match of the series.

As far as team is concerned, not much is going to change for England. Since England won ICC World Cup last year, we haven’t seen them playing much 50 overs cricket. Their team will be pretty much same, although Ben Stokes remains to be notable absentee.

Playing under Eoin Morgan’s captaincy, England has looked pretty positive on the field. After missing last T20 due to finger injury, skipper should be back in final eleven for the ODIs. Return of classical Joe Root will certainly boost their batting lineup. He looked in prime form in limited over cricket while playing in Vitality Blast for Yorkshire. He will certainly want to carry the same momentum while playing for his nation.

Apart from Joe Root, England’s regular opener Jason Roy is back in squad after having missed Pakistan series due to a side strain. On paper, England’s batting lineup looks very solid at the moment with terrific openers – Jason Roy and Jonny Bairstow, followed by Joe Root, Eoin Morgan, Jos Buttler in the middle order.

With the likes of Moeen Ali, Chris Woakes, England’s batting lineup goes deep. However, their bowling is somewhat weak. Apart from Jofra Archer, Mark Wood, rest of the pacers conceded runs in T20 series. Adil Rashid is expected to lead spin department with Moeen Ali pairing him up. If England will carry the momentum of T20 series, it will be very hard for the visitors to beat them on their home soil.

The main reason for loosing T20 series against England was Australia’s uncertain middle order. There were problems in their middle order and they altered their middle in all three T20s. However, it won’t be a case in ODI. Australia’s ODI squad is pretty much same as that of T20. We are likely to see Marnus Labuschagne in final eleven for the ODIs. His presence in the middle order will provide kangaroos a lot more stability.

Skipper Aaron Finch along with David Warner are likely to open the innings followed by Steve Smith, Marnus Labuschagne. We are likely to see Glenn Maxwell, Mitchell Marsh to handle middle order duties. After producing a match winning performance in the final T20, Marsh will be high on confidence.

Talking about visitor’s bowling attack, Mitchell Starc and Pat Cummins will be regular pacers along with Josh Hazlewood. With Adam Zampa, Ashton Agar, Nathan Lyon in the squad, Australians have their spin covered as well for the ODIs.

Manchester is expected to have partly cloudy conditions for the match day. Although, there are negligible chances of rain, hence we should expect a full 100 overs game without much interruption.

Traditionally we have seen batting friendly surface on Old Trafford, Manchester. Bowlers will get very little help from the pitch and they will have very less margins for errors as they need to very accurate with their line and length. Early moisture in the pitch is expected to help bowlers in initial overs of the game.

Chasing is best option as this is a flat track and no target can be considered safe on these kinds of pitches.

On the other hand Australia is currently placed at 2.00. If we calculate the winning percentage of Australia at these odds then it comes out to be 50.00 percent. 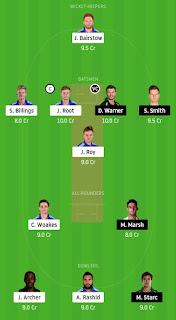