CPL 2020 semi-finals were one sided with zero excitement and now we are left with the final game in which undefeated Trinbago Knight Riders will lock their horns against St Lucia Zouks. After having witnessed one sided knockout matches, cricket fans are expecting something dramatic to happen in the finals.

Both the teams deserve to be in finals. Knight Riders have emerged as boss in this ongoing Caribbean Premier League whereas St Lucia Zouks have surprised everyone with their dominating performances. It is Zouk’s best performance in CPL history as they are in the finals for the first time.

In the last season of Caribbean Premier League, it was Guyana Amazon Warriors who reached final stage without loosing a single match but lost the most important game to Knight Riders, which was final match of the tournament. Trinbago Knight Riders will certainly be cautious as they will never want the same thing to happen with them this year.

In semi-final match against Jamaica Tallawahs, Knight Riders kept the battle one sided. Thanks to Kieron Pollard’s captaincy as he attacked Tallawahs with left arm spin after winning the toss. However, this tactic may not work against St Lucia Zouks and Knight Riders are expected to return to their normal mode against the likes of Mark Deyal, Rakheem Cornwall.

Akeal Hosein, Khary Pierre, Sunil Narine did fabulous job against Tallawahs in semi-finals. Fawad Ahmed has been bit expensive on multiple occasions but that doesn’t question his bowling effort. Dwayne Bravo and Ali Khan will have more work load in the finals.

Lendl Simmons may not be at his best in the initial games but he has gained his form later. In the absence of Colin Munro, Tion Webster came to bat at number three position and contributed well. What makes Knight Riders different from rest of the teams is, the performance of their reserved players. Even if they don’t field their best eleven, it doesn’t affect their gameplay.

On the other hand St Lucia Zouks have entered final stage for the first time and they believe, they can stun Knight Riders. Their first choice players were not available for this tournament but their replacements have been fantastic. Roston Chase, Mohammad Nabi, Scott Kuggeleijn have done great job and their performance during this tournament have led Sammy and his company to the finals.

In the semi-final, Zouks started the game as underdogs but they bowled out Guyana Amazon Warriors for 55, which is lowest team total in this season. The real test for the Zouks will be how their batting unit will perform. Rakheem Cornwall hasn’t scored anything big. Mark Deyal is certainly the find of the tournament. Zouks look over dependent on Roston Chase and Mohammad Nabi which might increase their tension.

A lot of rain has been forecast for the morning of the match which is certainly a bad news for the cricket fans. However, weather does improve as the day progresses. So we might have a delayed start in the final match.

A new surface was used for the semi-finals but that doesn’t reduce spinner’s role. Even on the fresh pitch, spinners grabbed most of the wickets, which means the track is again going to be spin friendly. Team batting first will be happy if they manage to cross 150 run mark.

Out of last five matches, four matches have been won by side batting second. However, chasing down targets on slower surface is not so easy. Pace of the pitch doesn’t allow batsmen to free their arms easily. Apart from this weather is also not promising. Hence, captain winning the toss should opt to bowl first.

Trinbago Knight Riders are currently placed at 1.50. If we calculate the winning percentage of Knight Riders at these odds then it comes out to be 66.66 percent.

On the other hand St Lucia Zouks are currently placed at 2.62. If we calculate the winning percentage of St Lucia Zouks at these odds then it comes out to be 38.16 percent. 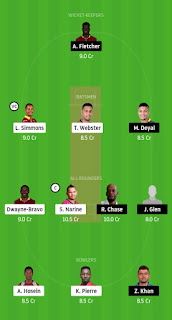