England dominated Kangaroos in the second T20 to wrap up the series 2-0. The kind of cricket hosts played in the second game, it won’t be wrong to call it an easy win. As the series is done and dusted, English opener and man of the match award winner in second T20, Jos Buttler has made himself unavailable for the final match. Apart from this Eoin Morgan’s injury may be of concern and he might be rested as well. Will it change fortunes of Australia ? Let’s figure it out –

After a dramatic surrender in the first game, every cricket fan was expecting visitors to bounce back but Australian side was very poor in the second match. To avoid clean sweep in the series, we may see few changes in the final eleven for the final game. Before heading into One Day Internationals, Aussies will definitely want to register atleast one win.

England continued its dominating performance over Aussies in the second as well – thanks to Jos Buttler who led his side in the run chase with an ease. Buttler is set to miss the final T20 and has cited personal reasons for this.

In his absence Tom Banton is expected to pair with Jonny Bairstow as an opener for the final clash. Banton was pretty impressive against Pakistani side as an opener and will definitely want to prove his point against Australians. That could open doors for Sam Billings in middle order – a player who scored runs against Pakistan.

The main problem for English side is the fitness of Eoin Morgan. He had a finger injury and there is suspense over his fitness. He can choose to rest for the final game as England has already won the series. If it happens, Joe Denly will be included in the final eleven as he is the only reserved batsmen left. Denly is talented but he is no where near to the class of Eoin Morgan.

England’s bowling has been pretty impressive so far. Return of Jofra Archer and Mark Wood have solved issues. Chris Jordan is too picking up wickets on crucial moments. Tom Curran has been expensive but he successfully defended runs in final over in the first match of the series. Adil Rashid has been brilliant with his leg spin.

On the other hand Australians have failed to handle pressure in the ongoing series. They were about to win the first game before collapsing dramatically. Even in the second game, it was their batting that didn’t click at the right moment. Skipper Aaron Finch  has batted well in the series but visitor’s real problem lies in middle order.

After loosing David Warner in the very first over, Alex Carey was promoted to bat on number three position. Carey has been excellent at the top order in Big Bash but he looked uncomfortable with the bounce, pitch was offering and was sent back to pavilion by Mark Wood.

In our opinion, Steve Smith should bat at number three, Marcus Stoinis was asked to bat at number four. Instead, Aussies should have used Glenn Maxwell ahead of Stoinis as we all know how destructive he can be once set.

Pat Cummins, Mitchell Starc, Kane Richardson looked ineffective in the last game against English side. Adam Zampa has been expensive so far in both the games. Ashton Agar has performed his part  smartly. If visitors want to avoid another loss, they must solve their batting issues.

There will be mostly cloudy conditions on the match day in Southampton with no chances of rain.

Surface at Southampton has bit of extra bounce in it that keeps both sides interested at all points during the game. Anything over 160 is competitive and hard to chase down.

England is currently placed at 2.00. If we calculate the winning percentage of England at these odds then it comes out to be 50.00 percent.

On the other hand Australia is currently placed at 1.80. If we calculate the winning percentage of Australia at these odds then it comes out to be 55.55 percent. 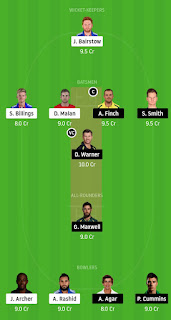