Every cricket fan was hoping for some thriller before the start of this series and a final ball finish in first T20 has certainly excited cricket fans. At one point of time England were dead and buried when Finch and Warner were on the crease. England not only came back from the dead but also managed to register victory by a narrow margin of 2 runs.

The way things happened in the first game, it should be an exciting series for sure. As things turned out in the first game, both the sides will be more cautious. Now the second battle is set on 6th September 2020 at the same ground.

After loosing the toss, the hosts were invited to bat first. After being rested for Pakistan series, Jos Buttler returned in fashion with a knock of 44 off 29 deliveries. Dawid Malan once again proved his worth as he was the highest run scorer among both the teams. Malan scored 66 off 43 deliveries. No other batsmen showed glimpse of staying at the crease. As a result of which England could only manage 162/7 at the end of 20 overs.

Kangaroos began this chase in a spectacular fashion. Skipper Aaron Finch along with his fellow opener David Warner scored runs with ease. While they were batting, everything was looking settle and at one point of time everyone thought kangaroos will register an easy victory. After the wickets of Aaron Finch and David Warner, Australian batting lineup surrendered unexpectedly. Adil Rashid striked twice in a single over – sending Steve Smith and Glenn Maxwell back to pavilion.

Although Marcus Stoinis fought back and scored 23 off 18 deliveries but it was not enough to lead his side towards victory. Overall, it was a remarkable bowling effort from English side who turned their loss into a victory. Skipper Eoin Morgan would be pretty happy to see his side’s fighting spirit and not loosing hope till the final delivery.

The Rose Bowl, Southampton has a good balance between the bat and ball. Batsmen will enjoy batting on the surface once they are set. Fast bowlers will look to take advantage of pace and bounce that the surface offers.

Here is a look at T20 stats at Rose Bowl, Southampton that we have witnessed in international T20s –

In recent times almost every team prefer to chase in twenty over cricket. But one should take note of the fact that pitch might slow down as the game progresses.

On the other hand Australia is currently placed at 2.10. If we calculate the winning percentage of Australia at these odds then it comes out to be 47.61 percent. 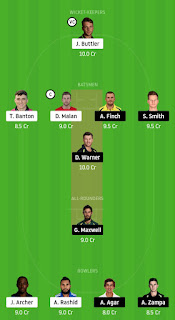