Contents hide
1 Match Details
2 Weather Condition
3 Pitch Condition
4 Venue Details
5 Toss Strategy – Win the toss, bowl first
6 Probable Playing 11 For Trinbago Knight Riders
7 Probable Playing 11 For St Lucia Zouks
8 Best Picks For Dream11 From Trinbago Knight Riders
9 Best Picks For Dream11 From St Lucia Zouks
10 Best Choices For Captain & Vice Captain Will Be –
11 Trinbago Knight Riders vs St Lucia Zouks Odds Comparison Case Study
12 Trinbago Knight Riders vs St Lucia Zouks CPL 2020 Dream11 Team For Small League
St Luzia Zouks have qualified for semi-finals for the first time after 2016
With just four league matches left, Caribbean Premier League 2020 has now entered in its final stage. Trinbago Knight Riders have already sealed number one position with it’s undefeated run. On the other hand it’s only second instance when St Lucia Zouks have entered into knockout round. The last time Zouks qualified for the semi-finals was back in 2016.
In CPL 2020, no team has been able to meet Trinbago Knight Rider’s standard. So far Knight Riders have played eight matches and won all of them. After securing their place in semi-finals, Knight Riders have continued to test their bench strength. Even though their rotation policy didn’t hurt their winning momentum.
Everything has gone right for one the most loved franchise in CPL history and the reason for it is their performance. Knight Rider’s fans will certainly be proud of their beloved team’s performance so far. Even if they rest players like Sunil Narine, Kieron Pollard, it doesn’t impact their team. The main reason behind their winning momentum is a balanced team.
Knight Riders are not dependent on one or two players like rest of the teams in CPL are. They have experienced openers in the form of Lendl Simmons, Sunil Narine. Their middle is one of the best middle order compared to others in the tournament. Talking about their bowling unit, they have spinners like Narine, Fawad Ahmed, Khary Pierre. The trio have been phenomenal throughout the tournament.
At present it will be a very tough call to bet against them and it will need a lot of courage to do so.
On the other hand, St Lucia Zouks have surprised everyone. They are also in semi-finals and have achieved this feat after 2016. Now the question arises that what changed the fortune of Zouks ? For this season, they drafted experienced all rounders like Roston Chase and Mohammad Nabi. Apart from this inclusion of Scott Kuggeleijn has also worked for them.
Roston Chase is the highest run getter for Zouks. In the bowling department, Scott Kuggeleijn is overall third highest wicket taker. Mohammad Nabi is just one wicket short as he is fourth highest wicket taker in the tournament so far. With five wins from eight matches, St Lucia Zouks are currently placed on third position and they will need one victory to climb on second.

Tarouba has a dark and gloomy weather with scattered thunderstorms expected between 8am – 3pm on match day. Looking at the bad weather condition the game may get abandon as well.

It’s very difficult to predict the nature of the pitch at the moment at Brian Lara Cricket Academy. It is because whenever Trinbago Knight Riders have batted first, they scored more than 170 runs and whenever other teams have batted first, no one has crossed 160 run mark. Spinner’s role have been crucial on the surface.

Considering bad weather condition, chasing seem to be much better option. Even if we get to see match, it will probably be interrupted by rain and hence, DLS equation will favor chasing team. 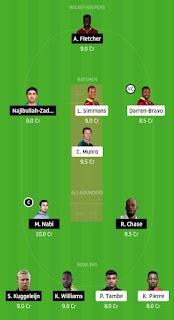