England is the only country that manages to get a full international season of cricket even as the Co-vid 19 rages the worldwide and that is something that the cricket world will thank it for.

Australia tour of England will begin with three match T20 series at Southampton. With two classical sides meeting each other on the field, is something which every cricket fan will surely love to watch. In recent times, England has become the leading limited over side and is now eyeing on T20 World Cup trophy after becoming world champion in 50 over cricket last year.

On the other hand, Australia hates loosing but more than anything else it hates loosing to English side. We all are well aware of the rivalry between the two sides in cricket world.

Recently, England shared the series 1-1 with Pakistan but we all are aware of the fact that against Pakistan, England didn’t field their best eleven. However it won’t be a case against Australia. Jofra Archer, Jos Buttler, Mark Wood are back in squad after being rested in previous series.

Against Pakistan, it was host’s bowling unit which was not at its full strength. Return of Jofra Archer will certainly be a booster in their bowling unit. England may be considered as favourites in terms of odds before heading into this game but we all know Australia is not a weak side.

Apart from this there are lot of uncertainty over the team’s selection. Ben Stokes is still unavailable. Tom Banton has done quite well against Pakistan so it will be interesting to see who among Tom Banton and Jos Buttler will pair with Jonny Bairstow at the top ? Return of Mark Wood means Tom Curran may be benched.

According to our point of view the top four batsmen in English batting lineup should be Banton, Bairstow, Malan, Morgan. With the return of Jos Buttler, Sam Billings may be on the bench. Jofra Archer, Chris Jordan, Adil Rashid, Tom Curran should be four bowlers. If England doesn’t want Ali to bowl full four overs, Sam Curran is the candidate who can be considered in place of Sam Billings.

On the other hand Australian batting lineup looks more solid than that of England. With the likes of Aaron Finch, David Warner, Steve Smith, top order of kangaroos look more solid. With Glenn Maxwell, Marcus Stoinis, Alex Carey as middle order batsmen visitors are having in depth batting order.

Aston Agar will be lone spin all rounder. Mitchell Starc, Pat Cummins will be their two front line pace bowlers. Hobart Hurricanes star, Riley Meredith might get a chance to start in the playing 11.

The pitch at Rose Bowl is expected to be batting friendly. With some decent amount of pace and bounce in the surface, it will also help bowlers. Team batting first should be happy if they manage to cross 170 run mark.

There are 30 percent chances of rain in this match. We may be able to get full overs game but one can never trust weather in England these days.

Here is a look at international T20 stats of Rose Bowl –

In the recent series against Pakistan, we have seen that England chased 190+ total. Hence captain winning the toss should opt to bowl first.

Best choices for captain and vice captain will be –

👉 Jos Buttler ( If he opens the innings )

👉 Australia have smashed 110 sixes in last 15 matches that they played against England which is an average of over 7 sixes per game.

👉 England have hit 225 fours in last 15 matches that they played against Australia. It’s an average of 15 fours per match.

On the other hand, Australia is currently placed at 2.10. If we calculate the winning percentage of Australia at these odds then it comes out to be 47.61 percent. 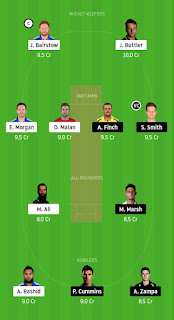