After loosing T20 series by 1-2, Australian team proved all odds wrong after beating England by 19 runs in first ODI which was played at Manchester yesterday. England entered into game as favorites but visitors were able to hold on their nerves in a game that was colorful.

After winning the toss, England invited Australia to bat first. Visitors lost their both openers in the opening powerplay. David Warner, Aaron Finch were in great touch in T20 series but the duo couldn’t perform with the bat in first match of ODI series. Surprisingly Steve Smith was benched and the early loss of wickets may have got Australia fans angry over exclusion of Smith.

Marcus Stoinis was promoted at number 3 and he played a valuable innings of 43 off 34 deliveries. Stoinis couldn’t convert his start into a big score before falling in trap of Mark Wood. At one stage, Australian side was looking in deep trouble and a score of 250 also looked beyond expectations.

Mitchell Marsh and Glenn Maxwell started their innings with caution and the duo scored 73, 77 respectively. After all due to Marsh and Maxwell, Australian side posted a respectable score of 294 for the loss of 9 wickets.

Chasing a total of 295, England lost Jason Roy early in powerplay. Ever reliable Joe Root also went back to pavilion after scoring just 1 run off 11 deliveries. Jonny Bairstow kept on scoring runs from one end while wickets were continuously falling from the other end. However, Sam Billings stood out infront of Australian bowlers and scored a magnificent century which was his maiden century in One Day International cricket. However his ton also couldn’t help England to reach their target and they could only score 275/9 in final 50 overs.

It’s a must win game for England as the series comprises of three ODI matches. Australia is now leading this series with 1-0 and it’s a golden chance for the visitors to win this series from here after having lost T20 series earlier on this tour.

Manchester is expected to have another bright and sunny day with no chances of rain. Hence the game is expected to go without any weather interruption.

Old Trafford is considered to be a good batting track when it comes to One Day International. There was some help for the spinners in the last game and we expect the same should be a case in second One Day International as well. If batsmen play with little caution, they can score big on this ground.

In previous game, England chose to bowl first and they just came close to chasing a 290+ total despite loosing 4 wickets for 50 runs. This indicates that chasing is bit easier on this ground. Hence captain winning the toss should opt to bowl first.

👉 Marcus Stoinis ( If bats one down )

On the other hand Australia is currently placed at 2.10. If we calculate the winning percentage of Australia at these odds then it comes out to be 47.16 percent. 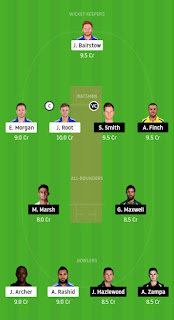