It was twice on the tour when three lions managed a miraculous comeback after being dead and buried. First it happened in the opening T20 game and for the second time it happened in One Day International cricket. This come back from England has leveled the series with 1-1 and the series decider will be played on same venue on Wednesday.

After getting ruined in T20 series, Australia will be hoping that they do not end up with similar fate in 50 overs cricket as well. Being the series decider, cricket fans will be hoping to see another colorful match when these sides meet each other at Old Trafford.

The way England bounced back in this ongoing series, it wouldn’t be wrong to say that hosts have developed a knack of bouncing back from the dead and dusted. Only Ben Stokes is missing out action in the field, rest of the team is same as it was in World Cup. However in this series their batting has been poor which was used to be their strength.

Jonny Bairstow and Jason Roy have failed to provide a good start. Bairstow is slowly building his innings and his slow starts have put pressure on middle order. One of the finest Batsman – Joe Root has also been not up to the mark and seem to struggle with his form. Jos Buttler was star performer in T20s series but but he is totally out of color in One Day International.

It was England’s bowling who fired back and defended a low total. Jofra Archer is consistently picking up wickets. Adil Rashid has been picking up wickets at a remarkable economy rate. Curran brothers were included in last ODI and the duo were fantastic in their role. Sam Curran picked up three wickets while Tom Curran scored crucial runs to take his team’s total beyond 200 run mark.

On the other hand Australians are still sweating over availability of Steve Smith – one of the finest batsmen in all forms of cricket. In his absence, Marcus Stoinis has been promoted at number three but Stoinis has failed to convert his starts into a big score. David Warner has fallen into Jofra Archer’s trap in both ODIs. Skipper Aaron Finch is carrying his team like one man army in batting department.

Australia’s middle order looks vulnerable at the moment. Mitchell Marsh has certainly provided a bit of stability but that’s not enough against World Champions. In second ODI it was second instance when Australia’s middle order collapsed surprisingly on this tour. However their bowling has been exceptional in ODIs. Adam Zampa has bounced back after a poor show in T20s. Inclusion of Josh Hazlewood has worked for them.

So far matches have been low scoring and full of action in this ongoing series and we expect the final game to be another cracker.

Manchester is going to have bright and sunny weather for the match day with very less chances of rain. Hence we expect the game to be played without any rain interruption.

Strip at Manchester has pace and bounce in it that helps spinners and fast bowlers. Batsmen will have to be cautious and need to spend some time in middle of the wickets before they can free their arms. Chasing has looked bit difficult on the pitch in current series.

So far team batting first has won both the matches in this series. In last ODI, England won the toss and elected to bat first which went in their favor. So captain winning the toss may opt to bat first in the series decider.

On the other hand Australia is currently placed at 2.10. If we calculate the winning percentage of  Australia at these odds then it comes out to be 47.16 percent. 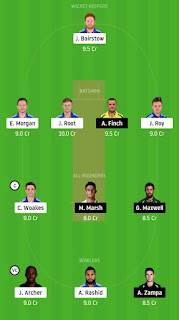