The wait is finally and the opening game of IPL 2020 will bring defending champions Mumbai Indians up against one of the most successful side in tournament’s history i.e. Chennai Super Kings. The two sides have been powerhouses of the tournament with quality players on both sides. In 2019 final, Mumbai Indians lifted the trophy after beating CSK by just one run.

It’s not the first time when IPL has been played outside sub continent. We have seen IPL being played in South Africa and UAE in previous years. There will be different conditions to that of sub continent and most of the players being Indian, it will be challenge for them to adjust in accordance with new playing conditions.

Mumbai Indians and Chennai Super Kings will not be affected by unavailability of English and Australian players for the first week which is good sign for them.

Overall Mumbai Indians have very good record against Chennai but when IPL was organised in UAE back in 2014, Mumbai Indians went on to loose five consecutive matches. This unwanted record is gathering headlines ahead of this opening match but in cricket every game is a new game.

Mumbai’s skipper Rohit Sharma will be confident going into this game with the kind of strength his side possesses in batting as well as bowling department. Sharma has been pretty consistent against Super Kings and will be keen to maintain his fine record.

Talking about batting department of Mumbai Indians, Skipper Rohit Sharma is expected to open the innings with Quinton de Kock, as he did last year. However Mumbai has bought Chris Lynn which means Lynn could be given opportunity to open the innings and Rohit Sharma could bat in middle order. Ishan Kishan, Krunal Pandya, Kieron Pollard, Hardik Pandya are expected to bat in middle order.

One man Mumbai Indians will be missing for this season will be Sri Lankan star Lasith Malinga. Last year it was Malinga who bowled a magical final over and made his side IPL Champions. Malinga has pulled his name back for this season. However they have included James Pattinson as his replacement but filling the shoes of Malinga will be very tough task. Pattinson will not be available for the opening game due to quarantine restrictions.

On the other Chennai Super Kings will miss the services of Suresh Raina and Harbhajan Singh for this season. The duo have sidelined themselves from this season due to personal reasons. For Super Kings, Shane Watson and Faf du Plessis are expected to open the innings. At 39, it could be the last IPL season for Shane Watson.

In absence of Suresh Raina, Ambati Rayudu is expected to one down and MS Dhoni may choose to bat at number four position. However if Dhoni doesn’t bat at number four, we might see one of Ravindra Jadeja or Kedar Jadhav at fourth position in batting order.

Ravindra Jadeja, Dwayne Bravo, Mitchell Santner will be possible all rounders that are expected to lineup in lower middle order. Chennai may not want to play Jadeja and Santner together as the duo are left arm spinners so we may see Piyush Chawla/Karn Sharma in the final eleven. Imran Tahir will be their prime spinner. Lungi Ngidi along with Deepak Chahar will lead fast bowling.

The conditions at Abu Dhabi would be perfect for a cricket match to take place on match day with no chances of rain.

The pitch at Sheikh Zayed Stadium is going to be flat and on slower side. It will not offer much bounce to the bowlers. Overall it will be a typical sub-continent pitch which Chennai Super Kings will not mind at all. Scores of over 160 have been difficult to chase on this pitch.

In last five matches that have been played on this venue, chasing side have won four times. With most batsmen not having played for a while, we expect that side winning the toss should opt to bowl first.

👉 Mumbai Indians have won 18 out of 30 games that they have played against Chennai Super Kings.

👉 Mumbai Indians have clobbered 202 sixes in 30 matches which is an average of more than 6 sixes per match.

👉 1st Innings score has been less than 165 in last three matches between these two sides.

Mumbai Indians is currently placed at 1.72. If we calculate the winning percentage of Mumbai Indians at these odds then it comes out to be 58.13 percent. 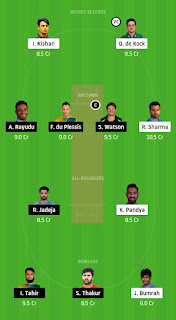