In the second game of Indian Premier League 2020, last year semi finalist Delhi Capitals will lock their horns against Kings XI Punjab. Both teams have never lifted IPL trophy and this time they will look to turn around the things. Delhi Capitals will be led by young Shreyas Iyer while after having traded Ravichandran Ashwin with Capitals, Kings XI Punjab will led by Lokesh Rahul.

There is one thing that is very common among both the teams i.e. both the teams have undergone constant changes in order to find the right balance and this is one of the greatest reason of not being the champions of such a prestigious tournament in the world.

This will be the first game of this tournament for both the sides and the duo will look to start their campaign on a higher note. Delhi Capitals have good mix of all rounders this season that adds depth to their batting and bowling as well.

Shreyas had a great season last time but his side couldn’t overcome Chennai Super Kings in the second qualifier and finished third in the points table. Delhi have lots of young talents in their rank and Iyer would be looking for a positive start this season. However Delhi Capitals have retained their core team of last season which is a positive aspect from management point of view.

Kagiso Rabad and Ishant Sharma form a formidable bowling pair. With all rounders like Ashwin, Keemo Paul, this year bowling department looks deep of Delhi Capitals. Delhi Capitals have drafted Marcus Stoinis, Daniel Sams who are known for their all round capabilities.

On the other hand it will be pretty interesting to see how Lokesh Rahul will lead his team in the tournament. Kings XI Punjab has been struggling for more than five years where they have been poor starters and will be hoping to turn around their fortune this time.

Universal boss Chris Gayle is expected to open the innings along with his skipper Lokesh Rahul. Mayank Agarwal, Mandeep Singh, Sarfaraz Khan are expected to bat in middle order. With Nicolas Pooran in their rank, Punjab has a solid finisher.

Weather Condition – There will be clear skies over Dubai on match day with 0% chances of rain interruption.

Pitch Condition – Traditionally there is little help for fast bowlers on the surface and scores of around 170-180 will be par score on surface like this. Unlike other venues, it’s generally a high scoring ground in UAE. However as the game progresses, spinners come into role and the ball turns sharply.

Generally it’s a high scoring venue and we have seen team batting first setting big totals. The ball tends to turn sharply in the second innings and chasing becomes bit difficult. Overall most of the teams have opted to bat first after winning the toss on this venue.

👉 Chris Gayle has hit most number of sixes in IPL history i.e. 326 sixes.

👉 Shreyas Iyer is third highest run scorer when it comes to head to head encounter between these two sides.

👉 KL Rahul has an average of 42.06 which is 7th best batting average in IPL history.

Delhi Capitals is currently placed at 1.61. If we calculate the winning percentage of Delhi Capitals at these odds then it comes out to be 62.11 percent.

On the other hand Kings XI Punjab is currently placed at 2.25. If we calculate the winning percentage of Kings XI Punjab at these odds then it comes out to be 44.44 percent. 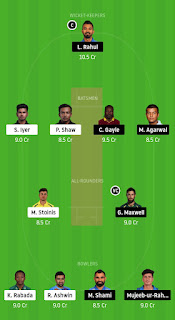