Rajasthan Royals will be without their premium all rounder – Benjamin Stokes. Jos Buttler is not available for this match due to quarantine protocol

Cricket fans are really excited to see thriller matches of IPL 2020. The tournament we all were so eagerly waiting for has started in a tremendous fashion. After an exciting contest between defending champions Mumbai Indians and Chennai Super Kings, second match of IPL was decided in super over. It won’t be wrong to say that that wait of the tournament has been justified by the action packed matches.

Up next in the tournament, Chennai Super Kings will take on Rajasthan Royals in the fourth match of IPL 2020.

Perhaps Rajasthan is most unglamorous team in the tournament but Royals are rich in talent. They have good mix of local youngsters along with renowned International stars. However both the teams have faced ban due to fixing scandal in past. Rajasthan was banned to feature in the tournament in 2016, 2017 respectively. Since then they have not tasted much success in the tournament and were unable to qualify for the playoffs in any of the season.

This time Rajasthan Royals have a strong team that includes star cricketers like Jos Buttler, Steve Smith, David Miller, Robin Uthappa at top of the order. Participation of Ben Stokes is still uncertain but it is clear that he will miss few initial matches for his team. Jos Buttler will be out due to quarantine protocol.

Rajasthan Royals may not have local super stars like rest of the teams but players like Shreyas Gopal, Sanju Samson, Yashasvi Jaiswal have proved their worth in domestic circuit. Jaiswal has delivered wonderful performances in U-19 Cricket World Cup. Gopal is an experienced bowler and pitches in UAE will make him more dangerous. He also had a great season last time and will be looking to carry his form in this season as well.

Rajasthan Royals has included Tom Curran who bowled final over against Australia in first T20 match and led his team towards victory. Curran is also a handy batsman who can score quick runs down the order. He is set to partner with Jofra Archer who is known for his lethal bowling. Slow pitches of UAE should also provide assistance to Jaydev Unadkat and Andrew Tye.

However absence of Ben Stokes and Jos Buttler for their opening game certainly leaves Royals in a bit of unbalanced situation. But still players like Steve Smith, Jofra Archer, Sanju Samson, Robin Uthappa, Shreyas Gopal will it a tough battle to overcome for Chennai.

On the other hand after Suresh Raina, Harbhajan Singh opted out of tournament, Chennai looked in deep trouble. However MS Dhoni not only managed his team but also managed to beat Mumbai Indians in their opening game.

Their game against Mumbai Indians was full of drama where both teams looked dominant over each other several times during the game. However Ravindra Jadeja, Sam Curran, Lungi Ngidi bowled terrific spells and restricted Mumbai on an average total. CSK lost both of their openers ( Murali Vijay & Shane Watson ) in run chase. However Faf du Plessis and Ambati Rayudu played match winnings knocks and the duo scored half centuries. Their partnership added 115 runs which helped CSK to bounce back after early loss of wickets.

After delivering with the ball, Sam Curran also scored runs with a strike rate of over 200. His performance against defending champions will put MS Dhoni in trouble when Caribbean all rounder Dwayne Bravo will be fit for selection. There are lot of positive outcomes that Chennai can take with them. Faf du Plessis solved the issue of number three position. With Deepak Chahar also capable to bat on, CSK batting look deep.

However, performance of their opening batsmen – Murali Vijay and Shane Watson will be a cause of concern for Chennai. It’s just the start of tournament and they have reserved opener in the form of Gaikwad, Jagadeesan. Murali Vijay looked uncomfortable against James Pattinson in the opening game and his position at top order may be in trouble if he doesn’t improve his performance.

Biggest positive for Chennai Super Kings is the captaincy of MS Dhoni. They adapt themselves in different playing conditions quickly which has been a reason of their successful campaigns in IPL history. Although Chennai will be missing the services of Raina and Harbhajan but still they did well against potent side of Mumbai Indians which will boost their confidence.

Weather is likely to remain hot and humid and the fitness of players will likely be tested. There are no chances of rain.

Average first innings score in UAE remains near 155 run mark. We expect that surface at Sharjah is expected to remain a bit of batting friendly.

Keeping dew factor in mind, batting becomes much easier in second innings as ball tends to come on to bat nicely in that case. Hence captain winning the toss, should opt to bowl first. 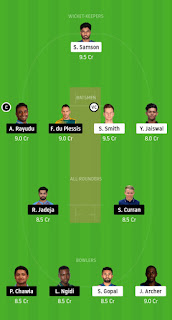