After loosing in Semi Finals, Sunday will witness an encounter between Grenadines Divers and Botanical Garden Rangers for the third place play offs. Although both the teams are out of finals but still they will love to end their journey on a higher note, with a higher position in points table. Botanical Garden Rangers have had a successful tournament so far as they won five of their total 8 league matches. On the other hand Grenadines Divers could only win two games out of the total 8 games played in the league round.
Grenadines Divers have had a poor tournament so far. Their batting and fielding has not been upto the mark throughout the tournament especially they dropped crucial catches during the course of this tournament. Their batting faced unnecessary collapses oftenly and no batsmen seemed to be responsible. They will definitely want to win this game and give their fans something to cheer about. Will they be able to do so ? The answer is yes if they play fearless cricket and avoid mistakes which they have constantly done in the league matches.
On the other hand Botanical Garden Rangers will be looking forward to unleash their wrath over Divers for not being able to reach final. Despite of big names like Kesrick Williams, Hyron Shallow, Kenneth Dember Rangers couldn’t make it to the finals. Their performance in the league round was phenomenal with just three losses from total of 8 matches. They have done good in all departments but they couldn’t stop La Soufriere Hikers in the semi finals. Still their confidence will be high as they have defeated Divers twice in the league matches.
Match Details
Venue – Arson Valley Ground
Date – 31st May 2020
Timings – 10:00 AM ( AST )
League –  Vincy Premier League
Weather Condition – There are slight chances of rain during the match.
Pitch Conditions – The conditions won’t change much for this much. The surface will be good for batting. Looking at the weather condition, pacers will enjoy bowling on this surface. Average first innings score at this venue is 87.
Recent Form Of Both Teams ( In last 5 matches )
BGR – L W L W W
GRD – L L L W L
Probable 11 For Botanical Garden Rangers
1. Hyron Shallow
2. Kenneth Dember
3. Romel Currency
4. Kesrick Williams
5. Atticus Browne
6. Kevin Abraham
7. Oziko Williams
8. Joey Welcome
9. Kimali Williams
10. Romario Bibby
11. Nigel Small
Probable 11 For Grenadines Divers
1. Romano Pierre
2. Asif Hooper
3. Alex Samuel
4. Shem Browne
5. Richie Richards
6. Wayne Harper
7. Razine Browne
8. Obed McCoy
9. Braxie Browne
10. Geron Wyllie
11. Shammick Roberts
Key Players For Dream11 Prediction
1. Hyron Shallow has been top performer for Botanical Garden Rangers while opening the innings. He has remained unbeaten twice in the tournament. He is averaging 24.3 runs per match with a strike rate of 157.55 in the total matches that he has played so far.
2. Asif Hooper has been star performer for Grenadines Divers. Being the captain, he has led his team from front. He is averaging 20.4 runs per match with a strike rate of 140.45 in the total matches that he has played so far. In the bowling department he has taken atleast one wicket per match with an economy rate of 7.17.
3. Kenneth Dember is another player who has added value to Botanical Garden Rangers with his all round capabilities. He is someone who is great stability in the middle order. His batting strike rate is 141.97 while in bowling department his economy rate is just 6.88.
4. Kesrick Williams has also performed we in this tournament. Although he is a bowler first but whenever he got chance to bat, he showed his class. He is batting at no.6 for Rangers and scoring quick runs. In the bowling department he is averaging 0.9 wickets per game but his economy rate is something which he should be concerned about. He is leaking runs at an economy rate of 9.56 despite being a renowned name in international cricket.
Botanical Garden Rangers Vs Grenadines Divers Match Winner Prediction
Without any doubt Botanical Garden Rangers are a better unit than Grenadines Divers. This is also getting reflected in odds as Rangers are favourite at 1.72. If we calculate winning percentage of both these teams then Botanical Garden Rangers have 59% winning chances.
BGR VS GRD DREAM11 TEAM 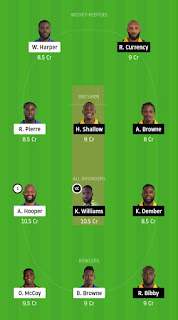 For Final Dream11 Team Join Our Telegram Channel – @freeteams4d11
Disclaimer – We have created this team based on our own instincts and analysis. Read our preview and try to make your own Dream11 team once the lineup is announced.