RB Leipzig is already in the Bundesliga’s hunt for Champions League football and a trip to the Rhein Energie Stadium to face Cologne is next up.
Julian Nagelsmann ‘s side has drawn both sides of a 5-0 demolition of Mainz with Freiburg and Hertha Berlin after the Bundesliga restart and last time out got a point on Borussia Dortmund, who lost to Bayern Munich at Der Klassiker.
Leipzig will need to be more competitive in the final third, but they are still unbeaten in the league on a run of nine matches, meeting Bayern Munich, Bayer Leverkusen and Borussia Monchengladbach as part of that string.
Together with a strong run in the European cup, qualifying for the Champions League should be enough to please the faithful in Leipzig while Cologne supporters should also be satisfied with the achievements of their team on this campaign.
The Billy Goats went on a fantastic run of eight wins in 11 matches from mid-December to the break of the league but experienced a disappointing return to play, drawing two and losing one of their final three matches.
They struggled to see lowly Mainz and Fortuna Dusseldorf outfits at home, and have struggled to retain a clean sheet in any of their previous five matches.
Match Details
Date – 2 June 2020
Timings – 12:00 AM ( IST )
Tournament – Bundesliga ( Round 29 )
Venue – RheinEnergieStadion, Köln, Germany
Recent Form Of Both Teams
FC Köln – W L D D L
RB Leipzig – D W D W D
Team News
FC Köln
Marsel Risse will be out of the action as he hasn’t recovered yet from a knee injury. Niklas Hauptmann is doubtful for this match. Rafael Czichos is back in training after having recovered from back injury while Sebastiaan Bornauw is suspended.
RB Leipzig
Ethan Ampadu is doubtful for this game with a back injury. Fabrice Hartmann won’t be featuring anymore in this season as he is out for a season with cruciate ligament injury. Ibrahima Konaté is expected to join the training in late June as he has not fully recovered from his hip injury. Yussuf Poulsen is out for few weeks with an ankle injury while Marcel Halstenberg is suspended for this game.
Probable Lineup Of Both Teams
FC Köln – Timo Horn ; Kingsley Ehizibue, Toni Leistner, Jorge Meré, Benno Schmitz ; Ellyes Skhiri, Jonas Hector ; Dominic Drexler, Mark Uth, Ismail Jacobs ; Jhon Cordoba.
RB Leipzig – Péter Gulásci ; Angelino, Dayot Upamecano, Lukas Klostermann, Konrad Laimer ; Daniel Olmo, Marcel Sabitzer, Kevin Kampl, Christopher Nkunku ; Patrick Schick,  Timo Werner.
Key Players For Dream11 Prediction
1. Timo Werner is hot pick for this game without any doubt. He has featured in 28 matches for Leipzig so far and ended up being player of the match on 9 occasions. He has scored 24 goals so far with 7 assists to his name.
2. Marcel Sabitzer is playing dynamic role in midfield department. In total of 28 matches he has scored 9 goals along with six assists. He has spent 2218 minutes on the field for his team so far with 931 accurate passes.
3. Kingsley Ehizibue stands like a wall for the pacy strikers when it comes to defense. With 48 successful tackles, 50 clearances, 34 interceptions in 26 games, Ehizibue will be key in Köln’s defense.
4. Mark Uth has played 18 games for FC Köln so far having scored 5 goals along with 4 assists. He has 302 accurate passes to his name after spending 1214 minutes in the midfield for his team so far.
FC Köln Vs RB Leipzig Match Facts
👉 RB Leipzig have failed to keep clean sheet in all the last 5 games they have played against FC Köln.
👉 FC Köln’s loss percentage against RB Leipzig is 60% ( highest than any other side with minimum 2 games played ).
👉 RB Leipzig Vs FC Köln will be the first Bundesliga game played in June for 25 years.
👉 FC Köln have scored atleast one goal in their last 14 Bundesliga games.
RB LEIPZIG VS FC KÖLN MATCH PREDICTION
Over 2.5 goals – Yes
For Cricket and Soccer Updates Join Our Telegram Channel – @freeteams4d11
RB Leipzig Vs FC Köln Dream11 Team 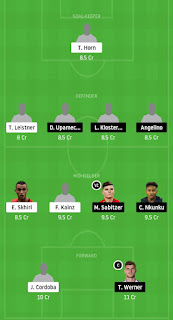 Disclaimer – We have created this team based on our own instincts and analysis. Do make necessary changes in your team once the lineup is announced.