Werder Bremen will entertain Eintracht Frankfurt on Wednesday and the in-form hosts will further raise their bid for survival in the Bundesliga with another important win.
Werder won two of their last three games, beating Freiburg 1-0 and then Schalke on Saturday, both away from home, by the same scoreline.
Florian Kohfeldt ‘s side also picked up a respectable point against Borussia Monchengladbach in order to make it three games without loss and now they seem to have the stamina for the bottom battle.
They remain second bottom, but now with a game in hand, they are just two points behind Fortuna Dusseldorf, who occupy the relegation play-off place.
With no fans present in the past fortnight, away teams have thrived with Werder ‘s two victories coming on the road, but a home victory looks more likely here with Werder’s new-found determination once again expected to be on show against incoherent Frankfurt.
Eintracht also claimed a much-needed 2-1 win in Wolfsburg on Saturday, but they endured a tough 5-2 defeat in champions-elect Bayern Munich and 3-1 home loss to Borussia Monchengladbach before an entertaining 3-3 draw in Freiburg ‘s home.
Those high-scoring matches – the four games from Eintract since the break have created 20 goals – point to action at both ends, but with Werder the more successful they go to beat a hard-pinning Frankfurt side.
There is no question that both sides are now looking in better shape compared to the start of the resumption, but Werder looked sturdy enough at the back and looked ahead more effectively.
Frankfurt should be able to score on Wednesday but they looked weak on the back, conceding 22 times in their last seven games, and the 2-1 home win is the most appealing bet for a correct score.
Eintracht lost four games away this season in the Bundesliga by that scoreline and three of those 2-1 losses came to sides – Augsburg, Mainz and Paderborn – who, like Werder, are actually in the table below them.
Match Details
Venue : Weserstadion, Bremen, Germany
Date : 4 June 2020
Timings : 12:00 AM ( IST )
League : Bundesliga
Team News
Werder Bremen
Claudio Pizarro is back in training after having recovered from muscle injury.
Kevin Möhwald is out for a season with a knee injury.
Omer Toprak is expected to be back in few days as he has recovered from his calf injury.
Niclas Füllkrug is also expected to join the training in few days.
Nuri Sahin has also shown great sign of early recovery from hip injury.
Eintracht Frankfurt
Gonçalo Paciência is expected to join the training session soon as he is recovering from his muscle injury.
Jetro Willems is expected to join the team in early August this year.
Lucas Torró is suspended for this match so he won’t be featuring in this clash.
Recent Form Of Both Teams
Werder Bremen – D L W D W
Frankfurt – L L L D W
Probable Lineup Of Werder Bremen
( 4-1-2-2-1 )
Jiri Pavlenka ; Theodor Gebre Selassie, Milos Veljkovic, Niklas Moisander, Marco Friedl ; Kevin Vogt ; Maximilian Eggestien, Davy Klaassen ; Leonardo Bittencourt, Milot Rashica ; Joshua Sargent.
Probable Lineup Of Eintracht Frankfurt
( 3-4-1-2 )
Kevin Trap ; Martin Hinteregger, Makoto Hasebe, David Abraham ; Filip Kostic, Djibril Sow, Gelson Fernandes, Almamy Touré ; Daichi Kamada ; André Silva, Bas Dost.
Key Players For Dream11 Prediction
1. Joshua Sargent – The American striker has played 22 matches for Werder Bremen, scoring 3 goals with two assists.
2. Bas Dost has played 18 matches for Frankfurt and has scored 5 goals along with one assist.
3. Davy Klaassen is the key in medfield department of Werder Bremen. In 27 matches he has 4 goals along with 4 assists to his name with total of 799 accurate passes.
4. Filip Kostic has been named player of the match on 5 occasions in 27 matches that he has played for Frankfurt this season. He has scored 4 goals and assisted 9 times.
5. Martin Hinteregger has spent 2339 minutes on the ground for Frankfurt this season. He has 45 successful tackles, 78 clearances, 29 interceptions in 26 matches that he has played this season. He has been named Player of the match one time.
Werder Bremen Vs Eintracht Frankfurt Match Facts
👉 In their last 3 meetings Eintracht Frankfurt haven’t lost to Werder Bremen, playing draw on two occasions and winning the rest.
👉 In their last three Bundesliga games, Werder Bremen have managed to keep a clean sheet.
👉 Werder Bremen have failed to register a win in their last 11 Bundesliga home games.
👉 In the last 4 Bundesliga games against Werder Bremen, Frankfurt have failed to register a win ( Lost – 2 , Drawn – 2 ).
👉 Frankfurt’s striker Andre Silva has scored in 3 Bundesliga games out of 4 since the restart of the game. Along with this he has had a hand in 9 goals ( 7 goals, 2 assists ).
Eintracht Frankfurt Vs Werder Bremen Score Prediction
Our prediction for the game is 1-1.
Eintracht Frankfurt Vs Werder Bremen Dream11 Team 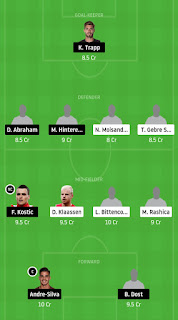 Disclaimer – We have created this team based our own analysis. Make necessary changes in your Dream11 team once the lineup is announced.