Borussia Monchengladbach got their Champions League qualifying hopes back on track last weekend with an emphatic 4-1 victory at home to Union Berlin and will follow up with an equally smooth showing at Freiburg.
Monchengladbach sit fourth in the Bundesliga but only goal difference separates them from Bayer Leverkusen in fifth position and with seven matches left this is a game they can’t afford to lose points in.
Marcus Thuram and Alassane Plea ‘s striking partnership, which combined to score 20 of their 57 league goals, was the catalyst for Monchengladbach’s success this season and prolific pairing was both aimed at Union Berlin.
It was the 11th time Monchengladbach had scored three or more from 29 league games and that includes in victory in three of their last four trips away.
Marco Rose ‘s men defeated Freiburg 4-2 on home soil earlier in the season and this looks like the ideal chance for the dynamic visitors to repeat the trick with their opponents faltering. It’s expected the Foals would do well here.
Freiburg may be flying high in eighth in the Bundesliga but they have won only one of their last eight league matches and are in danger of undoing all their hardwork in the early season.
Freiburg has failed to win in four attempts since football returned to Germany, firing blanks in home defeats against relegation-threatened Werder Bremen and Bayer Leverkusen, while at Leipzig and Frankfurt it was dominated in score draws.
Freiburg is the lowest-scorer in the top half of the Bundesliga with just 38 goals in 29 games (an average of 1.31 per match) and leading marksman Nils Petersen, who took nine of them, only scored once in his last 11 outings.
Match Details
Venue – Schwarzwald-Stadion, Freiburg im Breisgau, Germany
Date – 6 June 2020
Timings – 12:00 AM ( IST )
League – Bundesliga – Round 30
Team News
Freiburg
Janik Haberer is back in training after having recovered from foot injury.
Manuel Gulde is expected to join the training in next upcoming days as he is nearly fit.
Yoric Ravet is doubtful for this match.
Borussia Monchengladbach
Breel Donald Embolo won’t be part of the team for few more weeks.
Denis Zakaria is expected to join the training late this June.
Fabian Johnson is out for few weeks.
Tobias Strobl is out for a season with hamstring injury.
Recent Form Of Both Teams
Freiburg – W D L D L
Borussia Monchengladbach – W W L D W
Probable Lineup For Freiburg
( 4-4-1-1 )
Alexander Schwolow ; Lukas Kübler, Dominique Heintz, Philipp Lienhart, Christian Günter ; Gian-Luca Waldschmidt, Robin Koch, Nicolas Höfler, Jonathan Schmid; Vincenzo Grifo ; Nils Petersen.
Probable Lineup For Borussia Monchengladbach ( 4-2-3-1 )
Yann Sommer ; Ramy Bensebaini, Nico Elvedi, Matthias Ginger, Stefan Lainer ; Florian Neuhaus, Christoph Kramer ; Marcus Thuram, Lars Stindl, Jonas Hofmann ; Alassane Plea.
Key Players For Dream11 Prediction
1. Nils Petersen – 31 years old German forward will be key for Freiburg in the goal scoring department. He has featured in 29 matches for Freiburg, scoring 9 goals along with 2 assists.
2. Marcus Thuram – French winger is having good season so far for Borussia Monchengladbach. He has played 29 matches, scoring 10 goals along with 8 assists. Apart from this he also emerged out as Player of the match on 6 occasions.
3. Florian Neuhaus – The central midfielder has played 25 matches so far in this season having scored 4 goals along with 2 assists, adding 750 accurate passes to his name.
4. Dominique Heintz – The 26 years old German centre back is key in defensive department for Freiburg. In total of 23 matches he has spent 1984 minutes on the field with 26 successful tackles, 106 clearances, 34 interceptions.
Freiburg Vs Borussia Monchengladbach Match Stats
👉 Borussia Monchengladbach have won last 3 games against Freiburg.
👉 Freiburg haven’t lost any game in last 11 home games they played against Borussia Monchengladbach in Bundesliga.
👉 Borussia Monchengladbach have won only one game in last 17 games they played at Freiburg ( Draw – 5, Lost – 11 ). Their last win came back in March 2002.
👉 Borussia Monchengladbach haven’t lost any away game in last 5 away meetings, winning on 3 occasions while playing draw in rest two.
Freiburg Vs Borussia Monchengladbach Odds Comparison
Freiburg are currently placed at 4.33. If we calculate the probability of winning with these odds then it comes out to be 23.09%. But from our experience when such odds are placed the actual winning chances are about 37%.
Borussia Monchengladbach are placed at 1.75. If we calculate their winning chances then it comes out to be 57.14%. But in actual the winning percentage is about 71% when a team is placed with such odds.
FRB Vs MOB Dream11 Team 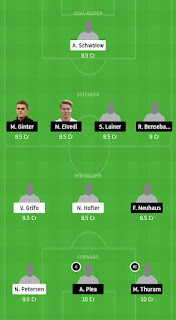 For updated teams join our telegram channel – @freeteams4d11
Disclaimer – We have created this team based on our own instincts and analysis. Make necessary changes in your final Dream11 team once the lineup is announced. Read our preview and try to make your own Dream11 team.