The first edition of Vincy Premier League is now heading to it’s departure. Along with two semi finals taking place, there will be the battle for fifth and sixth position in the points table. Fort Charlotte Strikers will take on Dark View Explorers for fifth place play offs, also the match winner of this game will meet President’s XI team on Sunday. Both the teams have had worst season so far and will be hoping to finish on a positive note. Both the teams have faced each other twice in the league round matches and both shared 1-1 win over each other.
At the end of tournament, Fort Charlotte Strikers have improved their game and the side looked more positive on the field in their last games which they were lacking earlier in the tournament. One name that has earned an early reputation in the team is certainly none other than Ronald Scott. He has joined the team in last two league games and show cases his class while batting in the middle order. He can rotate the strike well, he can hit massive sixes, a complete package for Fort Charlotte Strikers which they were searching for earlier in the tournament.
What caused Dark View Explorers is their over dependence on stars like Deron Greaves, Lindon James. No other player seemed responsible and consistent  throughout the tournament except these two. Although Shammon Hooper played a good role as an all rounder but that was not enough to take them into semi-finals. Another issue in the team was their spin packed bowling attack. There were cloudy conditions for most of the tournament and the team lacked good pacers in their bowling unit which caused them heavy damage.
Match Details
Venue – Arson Valley Ground
Date – 30th May 2020
Timings – 8:00 AM ( AST )
League – Vincy Premier League
Weather Condition – The conditions will be cloudy and there is a possibility that rain may cause interruption in this match.
Pitch Condition – Conditions are expected to be similar that we have seen in past few games. Batting first have enjoyed success but chasing is also not so difficult if batsmen play smart cricket. Looking at the weather conditions, captain winning the toss should opt to bowl first for this game. Average first innings at the venue in this format is 79.
Recent Form Of Both Teams ( In last 5 matches )
FCS – L W L L L
DVE – L L L L W
Probable 11 For Fort Charlotte Strikes
1. Sealroy Williams
2. Olanzo Billingy
3. Gidron Pope
4. Kirton Lavia
5. Ronald Scott
6. Selrick Caine
7. Keron Cottoy ( C )
8. Chelson Stowe
9. Jaheil Walters ( WK )
10. Rasheed Frederick
11. Ray Jordon
Probable 11 For Dark View Explorers
1. Deron Greaves
2. Shammon Hooper
3. Lindon James ( C & WK )
4. Andrew Thomas
5. Kody Horne
6. Kensley Joseph
7. Sealron Williams
8. Ojay Matthews
9. Davium Barnum
10. Darius Martin
11. Maxwell Edwards
Key Players For Dream11 Prediction
1. Deron Greaves is the premium player for Strikers without any doubt. In 8 matches he is averaging 17.9 runs per match with a strike rate of 123.27. In the bowling department too he is averaging 1 wicket per match with an economy rate of 8.14.
2. Kirton Lavia is another name which comes in mind when we talk about bowling unit of Fort Charlotte Strikers. He is their only consistent bowler who has regularly picked up wickets. He is averaging 1.1 wickets in 7 matches that he has played so far.
3. Lindon James is not only keeping wickets but occasionally he is rolling his arms. When it comes to bowling he has definitely enjoyed success in this department. In the last league match he picked up 2 wickets against the team like Salt Pond Breakers.
4. Ray Jordon is not among the big names but he has picked up consistently for his team. He is averaging 0.8 wickets per match with an economy rate of 7.13.
Fort Charlotte Strikers Vs Dark View Explorers Match Winner
Dark View Explorers will enter in this game as favourites which is also getting reflected in odds. They are currently placed at 1.76. If we calculate the winning percentage of both these teams then Dark View Explorers winning chances are about 53.8 percent.
FCS VS DVE DREAM11 TEAM 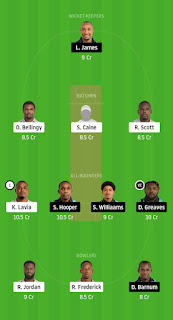 For Final Dream11 Team Join our Telegram Channel – @freeteams4d11
Disclaimer – We have created this team based on our own instincts and analysis. Make necessary changes in your final team once the lineup is announced. Read our preview and try to make your own dream11 team.