Match Preview
19th match of Vincy Premier League T10 will be played between Fort Charlotte Strikers, a team who has lost all their six matches and Dark View Explorers, a team who has won 2 matches out the total six matches played. Fort Charlotte Strikers are on bottom of the points table while Dark View Explorers are sitting on fifth position. Both the teams faced defeats in their last matches.
Fort Charlotte Strikers faced their sixth consecutive defeat in the 16th match of the tournament where they met Grenadines Divers. Grenadines Divers won the toss and elected to bat first. While batting first Divers posted a total of 103/5 in ten overs. Asif Hooper, Alex Samuel, Shem Browne were among the top run getters from Divers side. Kirton Lavia was the standout bowler from Fort Charlotte Strikers side. He was well supported by the likes of Keron Cottoy, Rasheed Frederic who took 1-1 wicket each.
Chasing a total of 103, batting lineup of Strikers collapsed with Gidron Pope emerging as the highest run scorer. Pope scored 18 off 14 deliveries. Rest no other batsmen in the team could manage to get into double figure mark. Tailenders including Chelson Stowe, Jaheil Walters, Ray Jordon played some good shots and the trio scored 26 runs for their team. Richie Richards took 2 wickets for his side. Obed McCoy took only one wicket but he bowled a maiden over as well. Braxie Browne was also among the wicket takers from Grenadines Divers side.
On the hand Dark View Explorers faced another defeat when they met Botanical Garden Rangers in the 17th match of the tournament. Explorers won the toss and elected to bat first. Shammon Hooper was the highest scorer fir his side, managing to score 31 off 27 deliveries. After the departure of Deron Greaves wickets kept falling on regular intervals as a result of which Explorers could only manage to score
80/6 in the 10 overs. Botanical Garden Rangers started their chase on a high note and the chased down the total within 8.4 overs.
Match Details
Venue : Arson Valley Ground
Date : 28 May 2020
Timings : 6:00 PM ( IST )
League : Vincy Premier League T10
Weather Conditions – There will be broken clouds at the time of match. It is expected to be sunny for most of the day with rain putting no interruptions in the match.
Pitch Conditions – As the tournament is progressing the strip is getting slower in the second innings with most of the matches being won by batting first . Average first innings score at this venue is 84.
Recent Form Of Both Teams
FCS – L L L L L
DVE – L W L L W
Probable 11 For Fort Charlotte Strikers
1. Gidron Pope
2. Renrick Williams
3. Sealron Williams
4. Kirton Lavia
5. Keron Cottoy
6. Chelson Stowe
7. Jaheil Walters
8. Ray Jordon
9. Rasheed Frederick
10. Sylvan Spencer
11. Ronald Scott
Probable 11 For Dark View Explorers
1. Deron Greaves
2. Shammon Hooper
3. Lindon James
4. Andrew Thomas
5. Kody Horne
6. Denson Hoyte
7. Sealron Williams
8. Kensley Joseph
9. Darius Martin
10. Davium Barnum
11. Maxwell Edwards
Key Players For Dream11 Prediction
1. Deron Greaves – He is consistently playing good cricket and adding value to his team. In the last 5 matches, Greaves has scored 22.6 runs per match with a strike rate of 120.21. In the bowling department he is averaging 1.4 wickets per match with an economy rate of 9.00.
2. Gidron Pope – In the five matches played at Arson Valley, Pope is averaging 25.4 runs per match with a strike rate of 129.59. He will be having responsibility to provide good start to his team while opening the innings.
3. Kirton Lavia – Till now he has played six games for his team and ended up picking 7 wickets in those 6 games. He is Striker’s premium bowler and his economy rate in the tournament so far has been 9.28.
4. Ray Jordon – Jordon is consistently becoming part of dream team. Although he is not a star player in this tournament but he is averaging 0.8 wickets per match with a phenomenal economy rate of 6.50. Coming down the order he is also contributing with the bat for his team so he can be a great pick in Dream11.
Fort Charlotte Strikers Vs Grenadines Divers Match Winner Prediction
Dark View Explorers are favourite for this game which is also getting reflected in odds. Currently they are placed at 1.61. If we calculate the winning percentage of both the teams then winning chances of Dark View Explorers are 62 percent.
FCS VS GRD DREAM11 TEAM 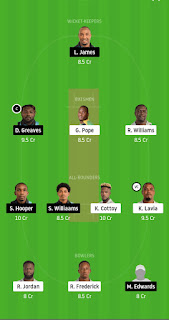 Disclaimer – We have created this team based on our own instincts and analysis. Make necessary changes in your team once the lineup is announced. Try to make your own team after reading our analysis.