Fort Charlotte Strikers and Grenadines Divers will lock their horns against each other in the 16th match of Vincy Premier League T10. It is the clash between such teams who are currently placed on bottom of the points table. There’s nothing good going on for Fort Charlotte Strikers as they have lost their all five matches in this tournament so far. Grenadines Divers are also in similar position although they have won one game out of the total five games played. If Divers are able to register win in this game then they will probably be in top 4 if Explorers loose their game. So there is lot of permutation and combination going on in the tournament between the teams in points table.
Fort Charlotte Strikers lost their fifth straight match against Botanical Garden Rangers. Charlotte Strikers have managed to win toss almost in each of their game but it seems they have not been benefitted by this. In their match against Rangers, Strikers won the toss and elected to bowl first. Soon their decision of bowling first turned out to be a suicide as Hyron Shallow along with Oziko Williams started on a great note. Both the openers had a partnership of 81 runs in 7.1 overs, scoring almost 10 runs per over. Hyron Shallow remained unbeaten for the second time in this tournament as he scored 44 off 29 deliveries. Oziko Williams scored 30 off 22 deliveries.  Kirton Lavia and Ray Jordon were only wicket takers from Striker’s side.
After the departure of Renrick Williams, partnership built between Gidron Pope and Sealron Williams. Once it was looking that Strikers will register their first win in the tournament but Ranger’s bowler held their nerves till the end which resulted in their nail biting victory over Strikers.
Despite of playing some good cricket, Divers are failing to convert it into a victory. In the 13th match of Vincy Premier League, Divers were up against La Soufriere Hikers. Divers won the toss and elected to bowl first. Captain Asif Hooper proved this decision as a masterstroke after sending Salvan Browne and Dillon Douglas back to pavilion in the very first over. Even after a poor start middle order of Hikers looked solid as they managed to set a target of 99 for Divers.
Chasing a target of 99 in 10 overs , Divers had a poor start as both their openers went cheaply. Alex Samuel was the lone warrior from Divers side as he scored 55 off 30 deliveries. No other batsman in the team could fight against the bowling unit of Hikers. Wickets kept falling on regular basis as a result of which Divers faced another defeat in the tournament.
Match Details
Venue : Arson Valley Ground
Date : 27 May 2020
Timings : 6:00 PM ( IST )
League : Vincy Premier League T10
Weather Conditions – There are slight chances of rain in this match so the conditions will be cloudy. Temperature will be around 27 degree celcius.
Pitch Conditions – The pitch at Arson Valley is favouring both, batsmen as well as bowlers. Whenever the conditions are overcast, pacers have enjoyed bowling on the surface while teams batting first have managed to score runs at the run rate of around 9-10. Conditions won’t be much different for this match. Average score at this pitch is around 84.
Probable 11 For Greandine Divers
1. Shem Browne
2. Asif Hooper ( C )
3. Alex Samuel
4. Romano Pierre
5. Tijorn Pope
6. Braxie Browne
7. Obed McCoy
8. Razine Browne
9. Richie Richards
10. Anson Latchman ( WK )
11. Geron Wyllie
Probable 11 For Fort Charlotte Strikers
1. Gidron Pope
2. Renrick Williams
3. Sealron Williams
4. Kirton Lavia
5. Keron Cottoy
6. Chelson Stowe
7. Ray Jordon
8. Ronald Scott
9. Jahiel Walters
10. Sylvan Spencer
11. Rasheed Frederick
Key Players For Dream11 Prediction
1. Asif Hooper has been the most consistent player for his side across all departments and he will be  the most vital player for Grenadines Divers if they want to who win in this match.
2. Kirton Lavia is another good all rounder who is must have in dream11 team from Strikers side. He is getting good start and consistently picking up wickets at regular interval.
3. Gidron Pope is the only consistent batsman at the top order of Strikers side. He will be having the responsibility of scoring quick runs at top of the order to help is team register first win in this tournament.
4. Sealron Williams was promoted in batting order where he performed quite well. Is all round cap abilities makes him a must pick in dream 11 team.
Fort Charlotte Strikers Vs Grenadines Divers Match Winner Prediction
Greandine Divers are definitely favourites for this game which is also getting reflected in odds. Divers are currently places at 1.83. If we talk about winning chances of both these two teams then Grenadines Divers have 67 percent winning chances.
FCS Vs GRD Dream11 Team 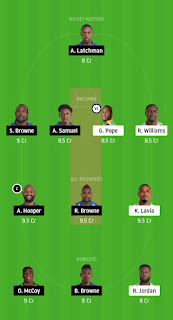 Disclaimer – We I have created this team based on our own instinct and analysis. Make necessary changes in your final dream11 team once the lineup is announced. Read our preview and try to make your own dream 11 team.