The fourth match of Vincy Premier League T10 will witness an encounter between table topper La Soufriere Hikers and Dark View Explorers. Both the teams started their campaign on a winning note and it will be pretty interesting to see who among the both will acquire the top position in points table early in the tournament.
Dark View Explorers managed to defeat Fort Charlotte Strikers in their opening game by 8 wickets. Explorers won the toss and invited Strikers on to bat first. Ronald Scott faced seven deliveries and went for a duck , getting run out by Kody Horne. Gidron Pope and Renrick Williams were the two top scorers from Strikers side as each of them managed to score 28, 20 respectively. Darius Martin was the stand out bowler from Explorer’s side as he took 2 for 5 conceding runs just at 2.5 per over. Another top performer in the bowling department from Explorer side was Sealron Williams who also claimed two wickets after conceding 16 runs in his two overs spell.
Chasing a total of 75 Deron Greaves and Kensley Joseph started their innings with caution and managed to score 37 runs in just 3 overs. Lindon James along with Andrew Thomas Dark View Explorers to clinch their first win of the tournament in just 8.3 overs.
On the other hand La Soufriere Hikers registered a comfortable win over Botanical Gardens Rangers. The story of the match was quite similar to that of first and third match. Soufriere won the toss and elected to bowl first. Rangers had no answers to bowlers like Jeremy Haywood and Othneil Lewis. Haywood emerged out as top bowler of the match. His bowling figure was 3-12, pretty good considering T10 format. He was well supported by Othneil who removed Atticus Browne in his first over. His line and length was remarkable in the match.
It was Haywood and Othneil who both managed to restrict Rangers on just 70 for 5 in the 10 overs. Chasing a total of 70, Salvan Browne and Desron Maloney showed no mercy on the bowlers. Maloney fired in his first match as he scored 41 off 20 deliveries including four fours and three sixes with a strike rate of 205. La Soufriere Hikers defeated Rangers by 9 wickets and registered a comfortable win in the end.
Match Details
Venue : Arson Valley Ground
Date : 23 May 2020
Timing : 6:00 PM ( IST )
League : Vincy Premier League T10
Weather Condition : Weather is expected to be sunny with clear skies hence there will be no rain interruption during the course of match.
Pitch Condition : The first three matches of the tournament were played on the same pitch which indicated that chasing was bit easier. For this match a new strip will be used and it will be interesting to see how the newly prepared strip behaves. Pacers enjoyed themselves on the first day of the tournament. Looking at the historical records of the ground we believe, the conditions will not be much different and scoring runs won’t be much easier.
Probable 11 For La Soufriere Hikers
1. Desron Maloney
2. Salvan Browne
3. Dillon Douglas
4. Dean Browne
5. Cosmus Hackshaw
6. Rawdon Bentick
7. Tilron Harry
8. Othneil Lewis
9. Jeremy Haywood
10. Rayan Williams
11. Kenson Dalzell
Probable 11 For Dark View Explorers
1. Lindon James
2. Kensley Joseph
3. Deron Greaves
4. Andrew Thomas
5. Kody Horne
6. Shammon Hooper
7. Denson Hoyte
8. Sealron Williams
9. Davium Barnum
10. Kemron Strough
11. Darius Martin
Key Players For Dream11 Prediction
1. Desron Maloney : After scoring 41 off 20 deliveries, Maloney showed what he is capable of. He usually opens the innings and can be very destructive on his day. He will be obvious pick for Dream11 fantasy players in their fantasy team.
2. Shammon Hooper : Being an all rounder Hooper was not used by his captain but he got great potential to deliver with both, bat and ball. He can be differential pick in fantasy team
3. Sealron Williams : He picked up two wickets in his two overs on the very first ball of each two overs. He is definite pick for Dream11 players.
La Soufriere Hikers vs Dark View Explorers Match Prediction
Both the teams won their opening game and both will try to maintain their winning momentum. La Soufriere Hikers are favourite in this match @1.91 but we are backing Dark View Explorers to win this game. If we calculate winning percentage of both these two teams then Dark View Explorers winning chance is about 55.9%.
La Soufriere Hikers vs Dark View Explorers Dream11 Team 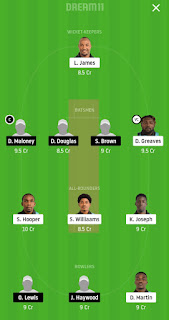 Disclaimer : We have created this team based on our own instincts and analysis. Do make necessary changes in your final team once the lineup is announced. Read our full preview and try to go with your own instincts.