The seventh match of Vincy Premier League T10 will be played between Botanical Garden Rangers and Dark View Explorers. Both the teams have played two matches each with each of them winning in one and loosing the other match. With better run rate, Dark View Explorers are places on third position in points table while Botanical Garden Rangers are sitting on fourth position in the points table.
Dark View Explorers met La Soufriere Hikers in their second match. After winning the toss they invited Hikers first to bat on. While batting first La Soufriere Hikers posted a mammoth total of 109/6 in 10 overs. For Hikers opener Salvan Browne gave a good start. It was Dillon Douglas who scored 40 off just 20 deliveries leading hikers to post a big total on the board.  Deron Greaves claimed 4 for 16, becoming the hero in bowling department.
Chasing a total of 109 in ten overs, Deron Greaves and Lindon James gave a very good start to their team as they managed 54 runs in just 5.3 overs. It was a time when Explorer’s fans were hoping that their team will claim a remarkable victory in this game but Hiker’s managed to seal the win in the end by a narrow margin of 6 runs.
On the other hand Botanical Garden Rangers beat Greandine Divers by 7 wickets. In match no 6, Rangers won the toss and invited Divers to bat first. Divers could only manage to score 66 for the loss of 5 wickets in 10 overs. Thanks to Kenneth Dember who outperformed with his bowling ability, claiming 2 wickets in his two overs after conceding just 4 runs. Nigel Small, Ray Charles, Casnel Morris took 1-1 wicket each.
Chasing a total of 66 Gardens lost Romel Currency in the very first over while Joey Welcome also went cheaply. It was Hyron Shallow and Kevin Abraham who lead Gardens towards the victory. Shallow went not after scoring 36 off 17 deliveries with a strike rate of 211.76. Now this is the first match of round three and both the teams will be looking for a win over each other.
Match Details
Venue : Arson Valley Sporting Complex
Date : 24 May 2020
Timings: 6:00 PM ( IST )
League : Vincy Premier League T10
Weather Conditions :  Some cloudy conditions are expected during the match with very little chances of rain. Most of the day it is expected to be clear sky.
Pitch Conditions : Conditions are expected to be similar as that of first two rounds. There will be a bit of bounce which may help batsmen to play their strokes easily.
Team News
Andrew Thomas was out from the last match due to an injury while Denson Hoyte was not seen recovered yet till round 2 of the tournament. There is a slight possibility that Javid William may make his debut for Dark View Explorers in this match.
Probable 11 For Dark View Explorers
1. Lindon James
2. Kensley Joseph
3. Deron Greaves
4. O’ Jay Matthews
5. Kody Horne
6. Shammon Hooper
7. Andrew Thomas / Javid Williams
8. Sealron Williams
9. Davium Barnum
10. Kemron Strough
11. Darius Martin
Probable 11 For Botanical Garden Rangers
1. Hyron Shallow
2. Atticus Browne
3. Romel Currency
4. Joey Welcome / Nigel Small
5. Kenneth Dember
6. Kevin Abraham
7. Kesrick Williams
8. Kimali Williams
9. Oziko Williams
10. Ray Charles
11. Casnel Morris
Stats and Trivia : Darius Martin, Kesrick Williams, Andew Thomas, Nigel Small, Kevin Abraham, Kenneth Dember, Casnel Morris, Kimali Williams are all Policemen. They all play for Police Team in their local Premier Division League.
Best Picks For Dream11 Prediction
1. Lindon James: He is the leading run scorer of the tournament after two rounds of the tournament so he is must pick in Dream11 team.
2. Kenneth Dember : He showcased his class and proved what he is capable of. In his two overs he picked up a wicket after conceding just four off his two overs spell in second round match.
Hyron Shallow : He is consistently scoring runs at the top order and he went unbeaten in the last match. He is obvious pick in Dream11 team.
Where to watch – Fancode
BGR vs DVE Match Winner Prediction
Botanical Garden Rangers are favourite for this match and we are backing Rangers to win @1.90. If we calculate winning percentage of both these two teams then Botanical Garden Rangers have 56 percent chance of winning.
BGR VS DVE Dream11 Team 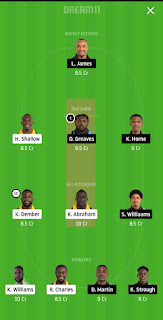 Disclaimer : We have created this team based on our own analysis and instinct. Make necessary changes in your final team when the lineup is announced. Try to make your own team after reading our preview.