After coronavirus pandemic that forced to suspend any kind of sporting action its time for Vincy Premier League T10 to bring smile back on cricketing fan’s faces. After a gap of almost two months Vincy T10 premier league has sparked lot of enthusiasm inside us and the opening day of Vincy T10 will witness three games. Second game of Vincy T10 will be played between La Soufriere Hikers and Botanic Garden Rangers. We are all aware of the fact that how big hitters are these Caribbeans and their big hitting will definitely lead this tournament into a great success.
With Derson Maloney as the marquee player La Soufriere Hikers constructs a very solid batting lineup. With power hitters like Salvan Brown, Rawdon Bentick, Dillon Douglas, they have the capability to destroy any bowling unit on their day. Wicket-keeper batsman Tilran Harry is most likey to pair with Maloney in the opening slot. Dean Browne along with Rayan Williams are most likely to bat in middle order. Jeremy Haywood, Othneil Lewis will be seen leading their bowling attack from the end. They will be well supported by the likes of Kimson Dalzell and Kenson Dalzall.
On the other hand Botanic Garden Rangers have signed up West Indies international Kesrick Williams as their marquee player, probably the biggest and most renowned name in the league so far. They got Romel Currency, Oziko Williams,  Kevin Abraham in their batting lineup. If we talk about their bowling unit, they have Kimali Williams, Ray Charles, Casnel Morris along with Kesrick Williams which makes them a formidable bowling unit as well.
Match Details
Venue : Arnos Vale Ground
Date : 22 May 2020
Timing : 8:00 PM ( IST )
League : Vincy Premier League T10
Weather Condition : According to AccuWeather there are chances of rain. There will be dark clouds in the sky at the time of match. Although a full 20 over game is on the cards.
Pitch Conditions : There is no idea that how the pitch will behave as we are witnessing a game after very long period of time. Taking weather conditions into consideration, fast bowlers will have an edge in this game.
Probable 11 For La Soufriere Hikers
Desron Maloney, Dean Browne, Dillon Douglas, Othneil Lewis, Salvan Brown, Rayan Williams, Rawdon Bentick, Kenson Dalzell, Jeremy Haywood, Tilran Harry, Kimson Dalzell.
Probable 11 For Botanic Garden Rangers
Kesrick Williams, Hyron Shallow, Romel Currency, Kenneth Dember, Atticus Browne, Oziko Williams, Kimali Williams, Kevin Abraham, Casnel Morris, Joey Welcome, Ray Charles.
Key Players For Dream11 Prediction Are
1. Kesrick Williams : One of the biggest name in this tournament and acquired as marquee player by Botanic Garden Rangers. In local T20 matches Williams enjoy a great record with 27 wickets in 18 matches where his bowling average was around 10.33. He can hit big shots coming down the order as he has contributed with 170 runs with a strike rate of 150.
2. Desron Maloney : 29 year old Maloney will definitely be the key player for La Soufriere Hikers. His experience will be important at the top order and will provide depth in their batting unit.
3. Atticus Browne : Browne is not a renowned name but his T20 stats are very impressive. He has scored 747 runs, crosses 50 runs mark six times at an average of 33.95. While bowling he picked up 24 wickets with two 4 wickets haul adding to his name. He can be very impressive pick when it comes to Dream11.
4. Dean Browne : A very solid all rounder with 605 runs in 22 T20s in domestic circuit. In those 24 T20s he grabbed a total of 24 wickets.
Some of the key points are
La Soufriere Hikers vs Botanic Garden Rangers Match Winner Prediction
This is the first time ever that both these two teams will lock their horns against each other so there is no statistical data available. Looking at the odds we are backing Botanic Garden Rangers To Win @1.75. If we calculate the winning percentage of both these teams then Botanic Garden Rangers have 59.7% winning chances.
LSH vs BGR Dream11 Prediction 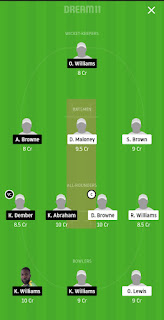 Disclaimer : We have created this team based on our own instincts and analysis. Do make necessary changes once the lineup is announced and try to make your own Dream11 team after reading our preview.