In last 23 matches that have been played between these two sides, Manchester United have emerged out as winners on 12 occasions, 7 matches ended in a draw while rest four went in Hammers favour.

Recent Form Of Both Teams ( In last 5 Matches )

Who Should Be Captain In Manchester United Vs West Ham United Dream11 Today?

Choosing right captain is always a cause of concern for Dream11 fantasy players. But don’t worry we have eased the task for you. After analysing Bet 365 odds we have selected best players that fits for perfect captain choices in this match and those players are –
1. Bruno Fernandes
2. Anthony Martial
3. Mason Greenwood
Players You Can Avoid In Grand League
You might have noticed that the team which wins grand league has some big players missing. After analysing Bet 365 odds we have shortlisted some players to whom you can avoid in grand leagues and those players are –
1. Marcus Rashford
2. Mark Noble
3. Pablo Fornals

Here is the list of players and their estimated pass number that they can get in this entire match –
1. Harry Maguire – 82 passes
2. Victor Nilsson Lindelöf – 76 passes
3. Declan Rice – 40 passes
4. Tomas Soucek – 34 passes. 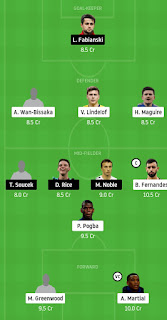