In last 12 matches that have been played between these two sides, Manchester City have won all of them.

Watford – L L W W L
Manchester City – L W W W L
Team News
Watford
– Daryl Janmaat is expected to recover from knee injury by late August 2020.
– Étienne Capoue is a doubtful for this match due to knock.
– Gerard Deulofeu is sidelined till late August 2020 due to cruciate ligament injury.
– Isaac Success will remain out of field till late July 2020 as he has not yet recovered from calf injury.
Manchester City
– Claudio Bravo is expected to recover from muscle injury by late July 2020.
– Sergio Agüero will remain out of action till late August 2020 as he has not yet recovered from knee injury.
– Zackary Thomas Steffen is expected to recover from ligament injury by late July 2020.

Who Should Be Captain In Watford Vs Manchester City Dream11 Today?

Choosing right captain is always a cause of concern for Dream11 fantasy players. But don’t worry we have eased the task for you. After analysing Bet 365 odds we have selected best choices for captain in this match and those choices are –
1. Kevin de Bruyne
2. Raheem Sterling
3. Gabriel Jesus

You might have noticed that the team which wins grand league has some big players missing. After analysing Bet 365 odds we have shortlisted few players to whom you can avoid in grand league and those players are –
1. Riyad Mahrez
2. Phil Foden
3. Adrian Mariappa
4. Will Hughes

👉 Manchester City have won previous 8 matches against Watford.
👉 Watford have scored in nine of their last 10 Premier League matches at Vicarage Road.
👉 Watford biggest ever home defeat ( 0-6 in September 2017 ) and biggest ever overall league defeat ( 0-8 in September 2019 ) have come against Manchester City.
👉 Manchester City haven’t lost their final away game of a Premier League season since 2008-09 ( 1-2 Vs Tottenham Hotspur ), winning eight and drawing two of their such matches since.
👉 Manchester City’s Raheem Sterling has been involved in nine goals in his last five matches against Watford in all competitions ( 7 goals, 2 assists ).

Here is the list of players and their estimated pass number that they can get in this entire match.
1. Aymeric Laporte – 93 total passes
2. Nicolas Otamendi – 89 total passes
3. Craig Dawson – 25 passes
4. Craig Cathcart – 24 total passes 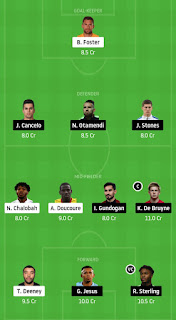