Contents hide
1 Match Details
2 Arsenal Vs Manchester City Head To Head Record ( In last 27 matches )
3 Recent Form Of Both Teams ( In last 5 Matches )
4 Team News
5 Probable Lineup For Arsenal
6 ( 3-4-3 )
7 Probable Lineup For Manchester City
8 Key Players For Dream11 Fantasy Team Prediction In Small League
9 Who Should Be Captain In Arsenal Vs Manchester City In Dream11 Today?
10 Players You Can Avoid In Grand League
11 Arsenal Vs Manchester City Match Facts
12 Arsenal Vs Manchester City Odds Comparison Case Study
13 Arsenal Vs Manchester City FA Cup Match Winner Prediction
14 Arsenal Vs Manchester City Dream11 Team For Small League
The most successful side in FA Cup history will take on current title holder on Saturday at Wembley Stadium. Arsenal will host Manchester City in FA Cup semi final this weekend. This will be do or die match for both sides as winner of this competition will enter finals.
Arsenal have won FA Cup in three of the last six seasons but last year it was Manchester City who clinched title with 6-0 win over Watford in the finals.
Manchester City will be boosted by the fact that they have already beaten Gunners by 3-0 in Premier League Round on June 17. It will be real test for Mikel Arteta and company to tackle Citizens.
A 2-1 victory over newly crowned Premier League Champions will certainly add lot of confidence in Arsenal’s camp ahead of their biggest game of the season.
Raheem Sterling, Kevin de Bruyne, Riyad Mahrez were benched against Bournemouth and the trio should be back in starting 11 for this important clash. This may be called as an intelligent strategy from Pep Guardiola’s side to keep his play makers fresh for such crucial games.
In last 12 meetings between these two sides we have witnessed 3.25 goals per 90 minutes. Since the project restart, Manchester City have scored 27 goals in their 9 fixtures. Apart from this City have dominated in games against Gunners since 2017 and they will be targeting their 8th straight victory over Gunners in all competitions.

In last 27 matches that have been played between these two teams, Arsenal have won 8 times, 6 matches resulted in a draw while Manchester City won 13 games.

Recent Form Of Both Teams ( In last 5 Matches )

1. Ilkay Gündogan – 29 years old German central mid-fielder has played 3 games in FA Cup so far where he ended up scoring one goal and assisted once.
2. Kevin de Bruyne – 29 years old dynamic Belgian mid fielder has played 33 league games where he ended up scoring 11 goals and assisted 18 times.
3. Pierre Emerick Aubameyang – 31 years old winger is second highest goal scorer in league games with 20 goals under his belt along with 2 assists.
4. Gabriel Jesus – In the absence of Sergio Agüero, 23 years old Brazilian will play as centre forward for Manchester City. In 32 league matches he has scored 13 goals and assisted seven times.

Who Should Be Captain In Arsenal Vs Manchester City In Dream11 Today?

Choosing right captain is always a cause of concern for dream11 fantasy players. But don’t worry we have used the task for you. After analysing Bet 365, we have picked up best players who can be captain and vice captain in your dream 11 team today and those players are –
1. Kevin de Bruyne
2. Gabriel Jesus
3. Pierre Emerick Aubameyang

You might have noticed that the team which wins grand league has some big players missing. After analysing Bet 365 odds we have shortlisted some players to whom you can avoid in grand league and those players are –
1. Bernardo Silva
2. Dani Ceballos

Back Manchester City To Win. 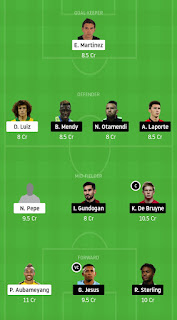