Contents hide
1 Match Details
2 Weather Conditions
3 Pitch Condition
4 Venue Details
5 Toss Strategy – Win The Toss Bat First
6 Probable 11 For England
7 Probable 11 For West Indies
8 England Vs West Indies Best Picks For Dream11
9 England Vs West Indies 3rd Test Match Facts
10 England Vs West Indies 3rd Test Match Odds Comparison Case Study
11 England vs West Indies 3rd Test Match Dream11 Team
After a long wait, cricket fans finally got something to cheer about in the form of England Vs West Indies Test Series. West Indies started their campaign on a remarkable note and stunned English side after registering historic win at Rose Bowl, Southampton. However English side made a strong come back in second Test at Manchester and levelled the series by 1-1 each.
It will be pretty interesting to see which side hold their nerves in the series decider which is going to start from July 24 at the same venue. West Indies batting side looks vulnerable in English condition as they collapsed badly in second Test.
Joe Root would have breathed sigh of relief as rain nearly denied them a win in last match. He would be happy to see how his team fought back and clinched nail biting victory over the visitors in extreme weather condition.
England have a bowling attack that is looking in good shape at the moment. Return of Stuart Broad has certainly boosted team’s performance and England are unlikely to make changes in their winning combination.
Rory Burn’s form at the top is bit of concern but his fellow opener, Dominic Sibley will be pretty confident after that marvellous hundred in the last game. The likes of Joe Root, Zak Crawley, Ben Stokes will add depth in the middle order followed by handy all rounders like Chris Woakes, Sam Curran. Down the order Dominic Bess, Stuart Broad can also bat if needed. Overall English side looks pretty solid than West Indies.
On the other hand Windies side surrendered themselves in last game as their batting lineup looked shaggy. Kraigg Braithwaite and John Campbell have got their starts but were unable to convert it into big score. Their top batsman Shai Hope doesn’t look in good form. Roston Chase is the one who has surprised everyone with his bowling in second Test and will look to continue the same form here in final battle.
In the bowling department, Shannon Gabriel performed well at Southampton but at Old Trafford he went wicketless. Alzarri Joseph need to bowl tighter lines in order to help his team. Kemar Roach will have the responsibility to restrict England’s top order.

Weather nearly spoiled the game in second Test and prediction for the final game doesn’t look much promising either. Conditions are expected to remain cloudy and rain is on the cards for match days.

Pitch would be difficult to bat on and the new batsman will find it difficult to adjust to the pace and bounce offered by the pitch. Average first innings on the venue in Test format is around 335. Fast bowlers enjoy when conditions are overcast but it is one the best track in England which has something for spinners in it.

Taking larger boundaries into consideration at this venue, batsmen who get their eyes in have had decent success on the venue. There won’t be much boundaries but we will see lots of twos and threes throughout the match.

Last eight games played at this venue have gone in favor of side batting first. Being the series decider, toss will be very crucial for both sides. The surface at Old Trafford Cricket Ground is known to break down as the game progresses and batting becomes more challenging, hence batting first will be wise decision.

👉 England To Win
With the return of regular captain, Joe Root, England bounced back in second test in fashion. England and West Indies have played 16 Test matches at Old Trafford where England emerged out as winner on 7 occasions ( including victory in last Test ), while West Indies have tasted success in 5 games, remaining games ended in a draw.
As mentioned above, England have managed to win four of their last five Test matches at Old Trafford, keeping fact in mind that the one game ended in a draw.
Apart from this last 10 Test matches between both these sides have yielded results, with each team winning five times. Moreover West Indies won their last Test match at this venue back in 1988.
Hence backing England to win will be a wise choice.
👉 Highest Individual score to be at-least 128 runs
Currently Bet 365 is offering odds of 2.10 for the highest individual score to be atleast 128 runs. In last 12 innings at Old Trafford, 127 run marks was crossed on four occasions.
Apart from this in last six head to head matches between England and West Indies, 127 run mark was crossed twice. Dominic Sibley almost made it thrice before getting out for 120 in previous game but thanks to Ben Stokes who played 176 run knock and made it thrice in last six matches.
Looking at power packed batting lineup of England, it should not be surprising if any batsman crosses 127 run mark. 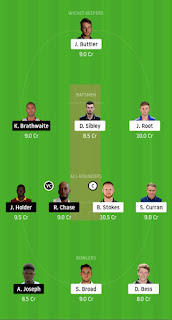