After a dramatic loss to Brighton and Hove Albion, Gunners will travel St Mary’s Stadium where they will meet Southampton. The Saints are just three points behind the Gunners when it comes to points table ranking. Arsenal are currently ranking on 10th position with 40 points in 30 matches whereas Southampton are placed at 14th position with 37 points in same number of matches.
Southampton started project restart with a bang as they crushed Norwich City by 3-0 which was an impressive dominant display. Thanks to strikes from Danny Ings, Stuart Armstrong, helping Southampton to claim their biggest win of the season so far. This victory helped the Saints to climb upto 14th position. Although their home form is a matter of concern for them. Before the closure of league, Saints faced three defeats in four matches infront of their home fans.
On the other hand Arsenal will enter in their third away game since the league resumption and the restart for them have been miserable. After a defeat to Manchester City, they were beaten by Brighton in the next game by 2-1. Match against Brighton brought several worries for the Gunners. Their front line goal keeper Bernd Leno got injured.
Nothing is going in Arsenal’s favour this season as their away record is getting dreadful with just one win in 14 games since late August. Last year when these two sides met at North London, we witnessed a 2-2 exciting draw between the both sides. Although in that fixture, the Saints were way better with 21 targeted shots than the Arsenal with just 12. Over 2.5 goals have been witnessed in three of the last four games between Southampton and Arsenal so we can expect and exciting game between the two sides.
Match Details
Venue – St Mary’s Stadium
Date – 25 June 2020
Timings – 10:30 PM ( IST )
Tournament – Premier League ( Round 31 )
Referee – Graham Scott
Where To Watch
Hotstar VIP
Star Sport Select 1
Star Sports 1
Star Sports Select HD1
Recent Form Of Both Teams
Arsenal – L W W L L
Southampton – L W L L W
Team News
– For Southampton Moussa Djenepo is suspended for this match.
Arsenal
– Bernd Leno got injured in last match and is expected to recover from his knee injury by early August 2020.
– Calum Chambers is expected to be fit by early July 2020.
– Cedric Soares is expected to join the team by early July 2020.
– Gabriel Martinelli is struggling with his knee injury and is expected to be fit by late July 2020.
– Granit Xhaka is back in training after having recovered from his ankle injury.
– Lucas Torreira is expected to be fit by mid July 2020 from his ankle injury.
– Pablo Mari Villar will not be seen on the field till late August 2020 as he has not yet fully recovered from his ankle injury.
– Sokratis Papastathopoulos is back in training.
– David Luiz is suspended for this match.
Probable Lineup For Southampton
( 4-4-2 )
Alex McCarthy ; Yan Valery, Jack Stephens, Jan Bednarek, Ryan Bertrand ; Stuart Armstrong, James Ward- Prowse, Pierre-Emile Højbjerg, Nathan Redmond ; Danny Ings, Michael Obafemi.
Probable Lineup For Arsenal
( 4-3-3 )
Emiliano Martinez ; Kieran Tierney, Rob Holding, Shkodran Mustafi, Hector Bellerin ; Bukayo Saka,  Matteo Guendouzi, Daniel Ceballos ; Pierre – Emerick Aubameyang, Edward Nketiah, Nicolas Pépé.
Key Players For Dream11 Prediction
1. Danny Ings – 27 years old English centre forward has played 30 matches for Southampton where he ended up scoring 16 goals along with two assists. He is Southampton’s leading goal scorer this season. In his last two Premier League games against Arsenal, he has scored 3 goals.
2. James Ward- Prowse – English mid-fielder 30 matches in this season so far. He has scored 4 goals and assisted thrice with 963 accurate passes to his name so far.
3. Nicolas Pépé – 25 years old winger has featured in 25 matches for Arsenal so far in this season. He has scored 5 goals and assisted 6 times.
4. Jan Bednarek – Polish centre back has played 28 matches so far. He 32 successful tackles, 161 clearances, 61 interceptions so far in this season.
Who Should Be Captain In Arsenal Vs Southampton Dream11 Today?
Choosing right captain is always of great importance when it comes to Dream11. Most of the fantasy players go with the percentage but that does not work all the time. Don’t worry we have eased this task for you. After analysing Bet365 odds we have selected best choices for captain in this match and the choices are
1. Pierre – Emerick Aubameyang
2. Danny Ings
3. Michael Obafemi
Players You Can Avoid In Grand League
After analysing Bet365 odds we have listed the names that you can avoid in Grand Leagues and the names are
1. Alexandre Lacazette
2.Eddie Nketiah
Southampton Vs Arsenal Match Facts
👉 Southampton have won three of their last 5 home games in Premier League against Arsenal.
👉 Arsenal have lost just one of their last 8 Premier League games against Southampton.
👉 This will be Arsenal’s third Premier League match to be played on Thursday this season.
👉 Southampton have lost more home games in Premier League this season ( 2019-20 ) than any other side.
Arsenal Vs Southampton Odds Comparison Case Study
Arsenal are currently placed at 2.62. If we calculate the winning percentage of Arsenal at these odds then it comes out to be 38.16 percent. But recent study shows that when a team is placed at these odds then it actually wins 43 percent of its matches.
On the other hand Southampton are currently placed at 2.60. If we calculate the winning percentage of Southampton at these odds then it comes out to be 38.46 percent. But recent studies shows that when a team is placed at these odds then it actually wins 51 percent of its matches.
Arsenal Vs Southampton Grand League Dream11 Team 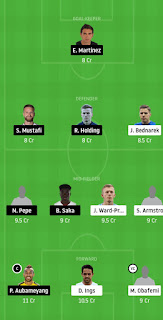