Sheffield United will host Arsenal on Sunday in FA Cup Quarter Final at Bramall Lane. Sheffield United’s hopes of qualifying for the Champions League since 2007 were shattered away when they were back to back defeated by Newcastle United and Manchester United. Sheffield United were beaten by 3-0 margin in each of those matches after which their position in points table slipped down to 8th spot. However Arsenal is standing in between their FA Cup semi final spot to whom they have already beaten once at Bramall Lane which will boost their confidence.
After successive defeats in Premier League from Manchester City, Brighton & Hove Albion, The Gunners were back on winning track after they thrashed Southampton by
2-0. Thanks to strikes from Edward Nketiah and Joe Willock, the duo gave Arsenal much needed win since the project restart.
Mikel Arteta’s side will likely to be tested by Sheffield United against whom they have struggled earlier this season. But we shouldn’t forget the matter of fact that with 13 titles, Gunners have won FA Cup more than any other English side and will be hoping to get closer to their 14th title when they travel Bramall Lane. This doesn’t seems as easy for the visitors as the hosts will make their life tough at Bramall Lane.
Match Details
Venue – Bramall Lane
Date – 28 June 2020
Timings – 5:30 PM ( IST )
Tournament – FA Cup Quarter Final
Referee – Paul Tierney
Recent Form Of Both Teams
Arsenal – W W L L W
Sheffield United – W W D L L
Arsenal Vs Sheffield United Head To Head Record This Season
The Gunners have not won any match out of the two in Premier League against The Blades this season. One match was won by Sheffield United and another was drawn.
Team News
Arsenal
– Their front line keeper Bernd Leno is expected to recover from knee injury by early August 2020.
– Calum Chambers is also struggling with knee injury and is expected to recover by mid August 2020.
– Cedric Soares is expected to recover from broken nose by early July 2020.
– Gabriel Martinelli is expected to recover from knee injury by late July 2020.
– Lucas Torreira is expected to be fit by early July 2020 from his knee injury.
– Pablo Mari Villar is expected to be back on field by late August 2020 as he has not fully recovered yet from ankle injury.
– David Luiz is back from suspension. as he was given red card against Manchester City.
Sheffield United
– Jack O’ Connel is doubtful for this match.
– Lys Mousset is also doubtful for this match.
Probable Lineup For Sheffield United
( 3-5-2 )
Dean Henderson ; Chris Basham, John Egan, Jack Robinson ; George Baldock, Sander Berge, Besic, Luke Freeman, Ben Osborn ; Billy Sharp, Oliver McBurney.
Probable Lineup For Arsenal
( 3-4-3 )
Emiliano Matinez ; Shkodran Mustafi, David Luiz, Rob Holding ; Ainsley Maitland Niles, Matteo Guendouzi, Joe Willock, Bukayo Saka ; Reiss Nelson, Alexandre Lacazette, Eddie Nketiah.
Arsenal Vs Sheffield United Key Players For Dream11 Fantasy Team Prediction
1. Reiss Nelson – 20 years old young English winger has played two games in FA Cup for Arsenal so far where he ended up scoring one goal and assisted once.
2. Ben Osborn – The English mid fielder has played three matches for Sheffield United in FA Cup so far. He has assisted once in total of 300 minutes that he has spent on the field.
3. Emiliano Martinez – 27 years old Argentine has proved his worth after Arsenal lost their primary keeper Bernd Leno with a knee injury. He has played three games in FA Cup for Arsenal so far where he kept 2 clean sheets and saved 8 shots from the opponents. With just single goal conceded in three matches, Martinez has emerged out Player of the match on one occasion.
Best Choice For Captain In Dream 11 For This Match
Choosing right Captain is always a cause of concern for Dream11 fantasy players. But don’t worry we have eased the task for you. After analysing Bet365 we have selected best choices for Captain in this match based on predicted lineup and the choices are
1. Edward Nketiah
2. Alexandre Lacazette
3. David Luiz
Players You Can Avoid In Grand League
After analysing Bet365 odds we have listed some players to whom you can avoid in Grand league. You might have noticed that the team which win grand league has big Players missing. So here is the short list of players to whom you can avoid in Grand Leagues
1. Pierre – Emerick Aubameyang
2. Billy Sharp
3. Oliver McBurnie
Arsenal Vs Sheffield United Match Facts
👉 Arsenal are winless against Sheffield United in Premier League games these season.
👉 Arsenal and Sheffield United played their FA Cup game back in March 2005. The game ended in goal less draw but Arsenal emerged out winner in penalty shootout by 4-2. That game was also played at Bramall Lane.
👉 Arsenal have won just one of their last 8 away matches against Sheffield United in all competitions ( Drawn 4 Lost 3 ). Their last away win came back in October 2007.
👉 Sheffield United’s six FA Cup goals this season have been scored by different players – Robinson, Clarke, Besic, Norwood, McGoldrick, Billy Sharp.
Sheffield United Vs Arsenal Odds Comparison Case Study
Sheffield United are currently placed at 3.00. If we calculate the winning percentage of Sheffield United at these odds then it comes to be 33.33 percent. But recent studies shows that when a team placed at these odds then it actually wins 46 percent of its matches.
On the other hand Arsenal are currently placed at 2.40. If we calculate the winning percentage of Arsenal at these odds then it comes out to be 41.66 percent. But recent studies shows that when a team is placed at these odds then it actually wins 40 percent of its matches.
Arsenal Vs Sheffield United FA Cup Quarter Final Match Winner Prediction
Although Arsenal haven’t won against Sheffield United in Premier League games but we are expecting a close fight in this game where The Gunners are expected to emerge out as winners with a small margin of 1-0.
Sheffield United Vs Arsenal Grand League Dream11 Team 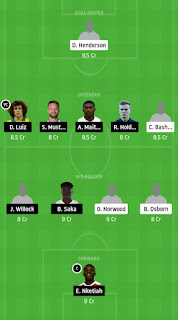