Red Devils return to Old Trafford for the first time since March 8 when they host Sheffield United. Manchester United are currently ranked on 5th position with 46 points in 30 matches whereas, Sheffield United are currently placed at 7th position with 44 points in same number of matches. Red Devils will definitely want to secure a win in this game to keep their Champions League qualifications hopes alive.
United started their campaign with a draw against Tottenham Hotspur, thanks to Bruno Fernandes late strike that helped Devils to claim crucial point away from home. Fernandes goal was a reward from quick feet of Paul Pogba, whose substitution on the field earned a well deserved penalty for United. He is also in line to start the game for United in place of Fred or Scott McTominay.
On the other hand Sheffield United’s restart was not as joyful as they might have expected. They were completely outclassed by Newcastle United by 3-0 at St James Park. Although they showed good game in the first half where they didn’t allowed Newcastle to score. But later in the second half, Newcastle found the net thrice and claimed a well deserved victory over the visitors.
When they are away from their home,they become more dangerous side and the stats shows the same. Sheffield United’s 80 percent away games have witnessed under 2.5 goals this season. They could give tough competition to Red Devils but Manchester United are on a 11 games unbeaten run, so pretty exciting game is on the cards.
Match Details
Venue – Old Trafford
Date – 24 June 2020
Timings – 10:30 PM ( IST )
Tournament – Premier League
Referee – Anthony Taylor
Where To Watch
Hotstar VIP
Star Sport Select 1
Star Sports 1
Star Sports Select HD 1
Recent Form Of Both Teams
Manchester United – D W W W D
Sheffield United – D W W D L
Team News
Manchester United
– Phil Jones is doubtful for this match.
– Axel Tuanzebe
Sheffield United
– Dean Henderson is not available for this match due to personal reason.
– Jack O’ Connell is expected to recover from knee injury by mid July 2020.
– John Egan is suspended for this match.
Probable Lineup For Manchester United
( 4-3-1-2 )
David de Gea ; Aaron Wan-Bissaka, Victor Nilsson Lindelöf, Harry Maguire, Luke Shaw ; Scott McTominay, Fred, Paul Pogba ; Bruno Fernandes ; Anthony Martial, Marcus Rashford.
Probable Lineup For Sheffield United
( 3-5-2 )
Simon Moore ; Jack Robinson, Phil Jagielka, Chris Basham ; Enda Stevens, John Fleck, Oliver Norwood, Sander Berge, George Baldock ; Billy Sharp, Oliver McBurnie.
Key Players For Dream11 Prediction
1. Marcus Rashford – 22 years old English winger has played 23 matches for Manchester United so far where he ended up scoring 14 goals along with 4 assists.
2. Aaron Wan Bissaka – English right back has played 27 matches for Red Devils so far. He has 69 successful tackles, 50 clearances, 55 interceptions to his name. He also assisted twice this season.
3. David de Gea – 29 years old Spanish goal keeper with 66 million USD market value is considered as one of the most versatile keeper in Premier League. He has 78 successful saves so far in 30 matches.
4. John Fleck – Scottish central mid-fielder has featured in 26 matches for Sheffield United so far where he ended up scoring 5 goals along with 2 assists.
Who Should Be Captain In Manchester United Vs Sheffield United Today Dream11?
Choosing right Captain is always a great matter of concern when it comes to Dream11. Lots of fantasy players goes with the percentage factor but that doesn’t work all the time. Therefore, we have developed our system bases on which we analyse Bet365 odds to bring out best choices for Captain for dream11 fantasy players. For this particular match, choices for Captain are
1. Bruno Fernandes
2. Aaron Wan Bissaka
Players You Can Avoid In Grand League
After analysing Bet365 in depth we have shortlisted some big names that you can avoid in Grand Leagues or mega leagues and the names are
1. Marcus Rashford
2. Billy Sharp
Manchester United Vs Sheffield United Match Facts
👉 Manchester United haven’t lost in 12 matches.
👉 Manchester United have won their last 7 games that they have played against Sheffield United at their home in all competitions.
👉 Sheffield United’s last victory over Manchester United came back in February 1993 in FA Cup.
👉 Despite to their 3-0 defeat against Newcastle United, Sheffield United have just conceded 4 goals in their previous 8 matches.
Manchester United Vs Sheffield United Odds Comparison Case Study
Manchester United are currently placed at 1.44. If we calculate the winning percentage of Manchester United at these odds then it comes out to be 69.44 percent.
On the other hand Sheffield United are currently placed at 8.50. If we calculate the winning percentage of Sheffield United at these odds then it comes out to be 11.76 percent.
Manchester United Vs Sheffield United Grand league team 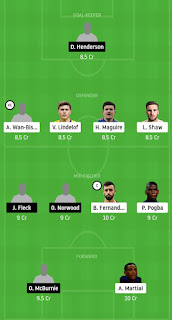